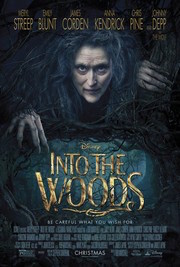 We went and saw this for XMas. Imagine Mama Mia, with better singers and worse music, done to 4 original (darker) versions of fairly tails, then an extra 30 minutes of filler to tie it all together at the end.

It was exactly what I was expecting, but longer, and not as good. It was far below that for my wife. The 2 hours 5 minutes went by at a glacial pace.

Fairy tails are too dark for young kids, and not enough action for older ones. The songs aren't catchy because the words are telling a story (so it's more story telling to music, with some chorus or refrains). And as a friend summed it up after seeing the play: Sondheim means great first act-terrible 2nd.

Don't get me wrong, the visuals were good, the makeup excellent, Meryl was fantastic, as were a few others as far as the acting and singing. But 2 hours of singing fairy tales made Fantasia seem coherent and face paced.

So there are people that will love it. 70% of reviewers liked it, but they're rating it base on "art" and not entertainment. Only half the viewers liked it. And I was in the other half.

It wasn't horrible, just way too long for about 45 minutes of plot. But if you like pointless musicals about fairy-tales, this will definitely be your thing.