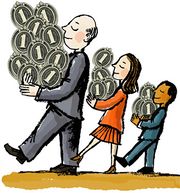 Disparity of income: who gets paid what, and why? I wrote this long before SJW's got their panties in a wad over income inequality, which is related but different. What I'm talking about here is some great group injustice, but just to help INDIVIDUALS.... knowing that if you help enough individuals, it makes a bigger difference against macro-injustice far more than the Snowflakes polarizing and dividing us into groups, and trying to regulate based on intersectional divides ever could.

I often hear complaints about how Women and minorities get paid less than white males. Then studies and numbers are thrown about, and used to prove the point, and it ends there in some big bash-fest about how "the system" discriminates and how unfair it all is.

I'm not going to pretend that things are always fair, or that there is no discrimination (or old-boys networks), etcetera -- but the numbers don't show what people think they show, if they would just use a little common sense. Some of the differences are certainly unfair -- but many, even most, are not. Most of the reason for differences is quite justified -- and can't be cured with quotas or legislation, nor should it.

If you don't think there are differences in gender-culture (identity) and the way women and men work in business, then you only need to do some observations of how things work in the home. Remember this is all statistical and does not apply to all individuals -- but does apply in very rough groupings.

Of course this doesn't mean that all this applies to every individuals -- but when you look at a statistical result (like salary differences) you must watch how you think of causal relationships. Is the cause of statistical salary differences because of glass ceilings and bigoted men (management) all trying to keep women down -- or is it because women are more likely to put family above job and take voluntary career setbacks and value flex-time over pure salary? Obviously there is some of both -- but those that want to ignore the latter are being as bigoted as those that want to pretend there is none of the former.

You can read more in Income inequality, but those screaming it's all about the evil white male patriarchy are ignoring the much easier explanation for most of the difference, that's right in front of their face. I'll leave it to the reader to decide if it's because of their ignorance, biases, or political agendas -- but if they won't admit most of the difference isn't because of a institutional sexism, then we know they're putting their religion above common sense.

Of course all these types of things affect race as well; for example Asians. I've been involved in some Asian communities (mostly Vietnamese, but others as well). You can look at the stats and quickly find that Asians get paid less than most white counterparts, at least statistically. More proof of a racist plot to hold others down? It becomes more ambiguous when you look at the facts.

Many Asians that lower the salary statistics do so because they english as second-language immigrants. Immigrants in general get paid less since they have communication issues and cultural issues that help prevent them from advancing as much. Like it or not, getting MVP on a team (or job), is often about like-ability and fitting in, and that's harder to do with language barriers, or just being a little slower on the quips, because you have to internally translate. It's not completely fair, but it's not purely racism either. That's not to mention cost differences in Visas, salaray history differences, and so on. Let's face it, if I have two employees of completely equal skills, except one has a language barrier like an accent and poorer communication skills, or microwaves stinky fish dishes for lunch that makes everyone else gag, then who is likely to get paid more or get the promotion? How many of those does it take to bring down the mean for a race or ethic group?

Culture is another factor. If you feel and act culturally isolated, then there is less bonding with your coworkers. Your salary is based on how valuable you are to the company, but this includes how big an impact your leaving will be. If people would just go, "oh, too bad, he worked hard", that is less valuable than the same worker who is liked around the company and has bonded with all his team mates, and who may have incredible influence and back-channel power.

If your culture is to do a good job, "fit in" and do the academic thing, but not stand out too much, then what is the likelihood that you are going to be the one person that stands out enough to get a promotion? The Japanese have a saying that is roughly translated as, "The nail that sticks up gets pounded down" -- which is true, especially in Japanese culture -- but the nail that sticks up may also snag you a promotion (you just have to stick up in the right way). Many different Asian cultures beliefs in harmony, combined with confucionistic, taoistic and Buddhist conformity, may influence many Asians to be unagressive enough (and blend enough) to NOT get a promotion, and not demand one, despite also encouraging them to do a good job.

And it goes beyond that. There is also some cultural beliefs about NOT complaining or making a stink. Not forcing others to "lose face" -- especially a superior. All the issues about rank in many Asian cultures, also means that they are less likely to challenge rank and aggressively climb in rank in American companies. Sometimes (rarely) calling "bullshit" on a bad idea (politely), can save the company a lot of money, and get you that promotion too. Just like Americans in many Asian companies may be "crass" and not know the rules of etiquette, and so limit themselves (career wise) as well. It's more than just racism, and much closer to tribal fit problems.

It doesn't take many of the "humble eggs" to bring down the average (statistically) -- and certain groups are more likely to contain those anomalous individuals. Of course this doesn't apply to just Asian in America (or Americans in Asia). This kind of Cultural-Identity effects all race groups; I just used Asians as an example. When you work with others, fitting in is important. Culture matters.

Another area that effects races/cultures and what they make is cultural acceptance of certain careers. All cultures have biases towards what is an "acceptable profession" that many have to get beyond. (If you agree that certain professions are more 'acceptable' to some cultures than others, then you need to look where those fit on pay-scale before looking at group rankings, etc.). All this means I would be surprised that if you looked at any arbitrary grouping and didn't see anomalous results, and many groups that did "worse" statistically. But we always have to remember that statistics don't always apply to individuals, any more than any other sort of over-generalization should.

It is harder for some races and genders to get ahead, but much of that is cultural and can be overcome. There are plenty of successful people in every race and gender to show that success is achievable. We are all minorities of some sort; white males are not a majority in America, they're not even the largest minority (white females are). White males just slightly outnumber others in the workforce, and more dramatically in some positions, especially leadership positions that tend to make the most.

There are bad companies out there -- but there are lots of good ones as well. You make your career, and it is up to you to seize opportunities. We can all learn the same lessons about how to succeed and get ahead. Some people will still stupidly discriminate because of race, culture or gender -- assuming that because the others of that groups did (or didn't do) X, that all will. Well, I can't fix that -- but I can offer suggestions to get around it, and I can offer directions or ideas for others.

The reason for mentioning the "reasons" and issues for wage differences is not just as a giant rationalization -- though I do believe many troublemakers are misleading the masses with poorly interpreted statistics and inflammatory false-causal relationships in order to empower themselves as "quick fix" solutions to the problem; just send us money or give us your vote and we'll make it better through force. But it is only through true understanding of the reasons that we can figure out the real solutions. There are things individuals can do about it. For example, someone can't immediately cure their language barrier -- but they can work on it, realizing that it can help them professionally. We need to address that communications is valued, and language matters in business. Poor speakers can become better writers. Poor writers compensate with more face-to-face. But for chances to be made, we first must accept that there is a potential problem. The same with cultural differences. You have to study them and learn them, and then adapt to them. The rest of society does not adapt to every individual, individuals must learn the rules of their culture. You can try to force change in your off hours but it is better for your career if you play by the rules while on-the-clock.

Hopefully this article has some value. I have been and am on both sides of the fence. I've hired people, and been hired. I've laid off and fired others. I've been laid off. I've given promotions and demotions, and received them. More than that, I've seen some of the racial, cultural and gender issues going on around me. Hopefully expressing what I've seen and learned will help others and give them a different insight that can help them in their careers. I recommend you read Getting a raise. It talks more about how to get a raise, and maybe help with some of the inequities in this area.