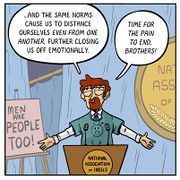 I heard a new term the other day "incel", and did a lot of research on it. Incel is short for IN-voluntary CEL-ibate, and it was created by a Woman a couple decades ago, to try to offer solace to the lost and lonely soles -- it gained notoriety after a mentally disturbed ex-Candian Military person (Alek Minassian) killed 10 people in Canada by driving a van down a busy street in Toronto, and self identified as incel... though the term and especially the ideas seeds, go back long before 2018.

As usual, there's the media/FakeNews/Alt-Left definition, and the truth which has a lot more nuance than you'll hear from them. While incel might have been coined by a Women, the men that use it use the term for themselves feel that many promiscuous women ("Stacy's") are shallow, vicious to nice guys, and either hate men, or prefer pretty alpha-males ("Chads") that treat them like shit. And the incels are bitter about that decay of values/status and vent/commiserate online to other incels and trolls that incite them. The alt-left version as told by Vox, BBC, and others is: men united by their inept inability to get laid (hence they're celibate, but not by choice), and only blame women for it: they're all racist/sexist/misogynists. I don't think those are mutually exclusive truths as both sides have a point -- but I know that being completely contemptuous of the other side is the norm for the far-left, in the name of tolerance, and is a great way to make the problem worse. 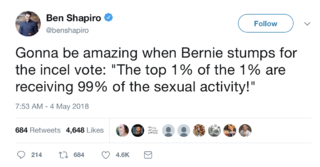 I'd respond by asking people if they can remember many females that were cruel to men/boys they weren't interested in, or if they knew any women that picked their partners extremely poorly (especially in their teens and 20's, though enough unwise 30 and 40 somethings show that aging out of stupidity is not guaranteed). Honest folks can concede that the incels might have some points in there. That sounds like the history of humankind to me.

Incels are mostly young, and buy into the far left's schtick of virtue-signaling intersectional Marxism. Their argument is something like, if everything I want but can't get is a "right" (like the left taught them), and they're not getting laid (which they really want), then someone has to be oppressing them. Since some Women are stupid/illogical or cruel, it must be their fault -- and they do to Women, what feminists, minorities and other lefties often do to men. (Point the fickle finger of oppressor hate).

Hey, if there is a hierarchy of victim status's that everyone falls into (like the left claims), then incels figure men who can't get laid deserve a victim status of their own. The problem isn't that they're diametrically opposed with the left, it's that they think like them and think the same rules that apply to feminists and other oppressed groups, should also apply back to them, after all, white males are a minority group, and certainly dorky males that can't get laid, are a smaller and more frustrated minority group. Hear them roar. They are the Bernie Sanders of the dating world, asking for redistributive sex. Seriously. Ben Shapiro summed it up in a tweet:

When the left can't rebut points head-on (usually), they just lie/distract and make it about something else: control the language and control debate. So just because incels subscribe completely to left-wing intersectional victimhood beliefs, doesn't mean they're left wing. Since they resent Women (who deny them goodies), they must by misogynist and thus right wing. Or so says the left wing. Please ignore that there's no evidence that they're actually right wing in any other way, in left-speak left is good and right is bad, and thus they must be right, no matter how aligned they are to the far left.

Sadly, the lefts inability to admit valid points seldom help. What that really does is bottle up (shut down) the other side.... that agitates them until at least a few sociopaths will retaliate poorly. Then the left uses those outliers as a a broad brush to mischaracterize everyone in the set they hate. In far left intersectionality there's a hierarchy of victimhood, and the left is always to striving to put themselves (or their preferred group) on the top, and invent reasons why everyone else's grievances don't count and they are on the bottom.

The point isn't to blame it entirely on the idiots on the far-left. I think violence is mostly a problem with the person who commits the act, and then way down the list, the society that failed to do anything about the many warning signs we find out about afterwards. Then far below that is the agitators that trolled and angered and bullied the kid into lashing out. But there is no doubt that multiple people can share responsibility. And there's no doubt that the far-left makes it worse by pretending there's no valid points or misrepresenting the whole thing to the point that the only release is violence. Shout down, misrepresent, insult and even get people fired for opposing views (ruin their lives), and at least a few will respond poorly.

If you think that's melodramatic, it isn't. There's already a movement by the exact kind of radical feminists that the incels hate, to hunt down and fire all the incels -- as if removing their one outlet (throwing themselves into their jobs) will somehow reduce violence or make them change their ways. Of course that was already being robbed from them by hiring quotas/preferences towards women, intimidation/firing for flirting in the workplace (if they're bad at it), and suppression of view (political correctness codes). 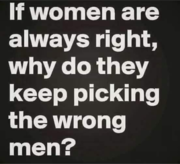 Very few incels think that violence against Women or innocents is the answer, nor would think that one mentally disturbed fanatic represents everyone in the group. But that's how the media and far left will portray them, making everything worse -- they love to hypocritically scream at others to "not judge them" by their identity du jour (whatever that is), while that's exactly what they do to the other side.

Most incels are just young, dumb, and want to be heard and vent. They're online bitching about their situation and would depressurize... except trolls (often left wing) are on there either inciting them, or discounting them. And they retaliate by behaving worse. They openly mock and satirize the PC movement, and play up the misogyny: if you're getting called a disgusting pig and worse, then most people reflect things they think will outrage others. And they all try to one-up each other on the absurdity of their claims/complaints. The new internet is all about being shocking enough to get attention. Most of it would lead to nothing, except that a few incels have copied the far left's ideology and committed violent acts against their oppressors. Like Antifa, BLM, the DNC and the SPLC, if everyone that disagrees with you is evil -- then doing evil back to them is justified. (Or that's their rationalization). And thus, at least a few of them WILL do revenge violence.

Incel gained notoriety after Alek Minassian killed 10 people in Canada by driving a van down a busy street in Toronto (on 04/31/2018). And when you look into it further, you can find a few that related to Elliot Rodger, the Santa Barbara shooter of 2013 as an incel believer as well. And even then, Elliott was doing a Sodini after George A. Sodini, who killed a lot of women out of his sexual frustration.

I don't excuse any of that, and that shit disgusts me. And if the left let the facts speak for themselves, it would end there. I'd just rail against the incel movement that can't control their emotions, and acts like obnoxious little whiney douchebags (they're like Hillary voters after they lost the election). But the left has to make everything about them. They have to misrepresent the ugly facts, to make them even uglier, or pretend that they are innocent and would never behave like those guys, or starts calling them right wing... and we come full circle -- if you want to defend the truth, you have to oppose the left. We get into the same hypocritical conundrum: if a few mass murders read SPLC's or BLM's hate-speech (or buy into their victim status), and act on the injustices with vigilantism and murder people on the other side, the media and SPLC will say, "They don't represent the true movement". But if fewer crazies are into whiney incel victim groups, and they commit violent acts, the media and far left (but I repeat myself), will fall all over themselves trying to claim that those few crazies are the norm in that other movement. Ironic, but in a Hillary Clinton way, like claiming she wants to end identity politics, and that's why the should all vote for her because she has a vagina.

My biggest problems with incel is they buy into the lefts victimhood Marxism to begin with. I dislike them because they're almost the same as the alt-left whiners, in means and beliefs, just how they rank their intersectional victimhood is what varies. Thus, I'm not a fan, nor associate in any way with the incels.

As I was once a teenage boy, I can understand their frustrations, and that some of their complaints are grounded in some truths. However, their way of coping (bitching and whining and having rape-revenge fantasies) certainly aren't constructive, even if I know 99.9% are never going to act on it. So generally, I'd be against and somewhat intolerant of the incel crowd... if I wasn't even more intolerant and lying far left hate groups like the SPLC or Vox, pretending that their shit doesn't stink, that there's absolutely no points on the other side, or pretending everyone who doesn't agree with them is Hitler. So without the left interjecting themselves, I completely oppose the incel movement as not-constructive. But with the left screaming falsehoods and exaggerations and generalizations, then I'm forced into defending the truth, and that means defending against the most absurd claims against a group that I have no like of, or respect for.