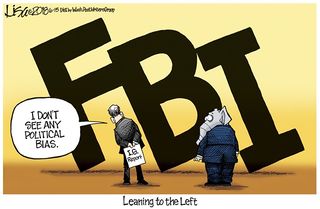 IG report has many startling revelations:

Look, all politicians lie... some subtly, some blatantly. But as long as the media is in one camp, that side will lie more, because there's fewer consequences and more reward. The media is definitely in the camp (and repeating) all the dishonest far-left talking points. From the start the Democrats and their media claimed that the IG report shows "no bias", which only works on their base, as anyone with 4th grade reading comprehension and the motivation to glance at the source material will quickly conclude the exact opposite.

Since the report says the opposite of the top Democrats and MSNBC, CNN, etc., that let them on and don't challenge them, you can not trust what the media or politicians tell you.

The Inspector General did a report on FBI's Trump/Comey investigation[5], and concluded there was bias, abuse, :

So the IG Report showed that the FBI and DOJ were biased in handling the Hillary case. Comey and much of the FBI was in the bag for Hillary. They can't prove the biases INTENTIONALLY interfered in her favor, but we have lots of evidence that every decision they made was trying to benefit her and that she was not treated like anyone else would have been. The Russians could only dream of having the kind of influence on an election that the FBI, Democrats and the Media have to undermine Democrats and persuade the public through dishonest propaganda. [15]

The left blamed Comey for re-opening the investigation into the Weiner laptop, and that sabotaged the election for Hillary, only that's as dumb and dishonest as their other premises. Comey only re-opened that late because they were trying to stall past the election and panicked, even he admits his intent was to protect her legacy. And if he hadn't of re-opened and she won (as they all expected), then she would have been under a cloud from day-1, so they admitted they did so to try to protect her (not hurt her). Yet there has never been any evidence shown that re-opening the investigation hurt her with her supporters, or her opponents, who both were unlikely to change their votes that late in an election. What we do know is that if the public had known the truths in the IG report about how corrupt and biased the FBI/Comey had been during all this (for Hillary and against Trump), or if they Hillary was being prosecuted during the election as was required by law, then it would have changed many votes away from Hillary and in favor of Trump. So the FBI/Comey's behaviors benefited Hillary far more than they hurt her.