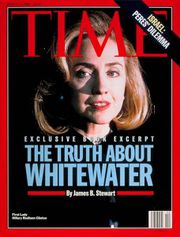 This was a complex mess starting in 1980, and going through the 1990's. Basically the Clintons got in a land deal with James McDougal (and wife Susan) to borrow money and build vacation homes in the Ozark Mountains. As governor, Bill Clinton had some influence to peddle (and he'd also assigned McDougal to key position in government), while McDougal bought a savings and loan (Madison Guaranty), who then used funds in ways that benefited the Clintons (kickbacks to campaign fund, private loans, insider lending, and so on). Just Arkansas old-boys quid-pro-quo stuff.

After the failure of the S&L, federal regulators removed McDougal for "improper practices" and the bank collapsed, the property sold off, with McDougal getting charged with fraud. The Federal Resolution Trust Corp. investigation sent a referral to the Justice Dept. naming the Clintons as "potential beneficiaries" of illegal activities. A few years later Vince Foster filed 3 years of delinquent tax returns they had "accidentally" forgot to file correctly-- then commits "suicide" in a park after this is being investigated. The Whitehouse interfered with federal investigators and raided his office before letting them in (called "Obstruction of Justice").

Some key events in the scandal include:

But finally, the whole mess is dropped. Most people interviewed feel the Clintons were slimy and unethical, but there's not enough evidence to take down a President and First Lady (unless they were Republican). Hillary supporters claim not enough evidence to convict exonerates them. Their detractors think this shows what kind of people they are, and the company they keep.

Again the FactCheckers don't want to touch the truth of something this slimy and that would make their candidate look bad. So Snopes touches on James McDougal's death to try to debunk that just because many of Hillary's associates drop dead, that doesn't mean there's a conspiracy. (Something I agree with them on). FactCheck dodges. And Polifact only touches on Bill's claims that Hillary was "completely exonerated" in Whitewater, which they give the statement a "mostly true", despite the investigation saying the opposite with things like:

So the fact checkers avoid the bigger topic that it was another mess/scandal, with 16 convictions, tons of illegality and corruption, Hillary lied, lost records, had shady ties, questionable ethics, and a lot of double dealing by friends of the Clinton's. She's often in these messes, which says something whether she keeps getting "exonerated" or not. But again, the lie of omission is in picking nits, parsing words and ignoring the bigger truths.