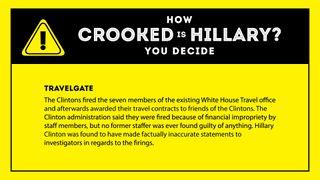 Clinton friend Harry Thompson (and his TRM charter company) had wanted to do some charter business with the WhiteHouse Travel office, but was rebuffed (they were a relatively new company, and their only client the year before had been the Clinton Campaign).

At least this one caused a media field day, on the abuse of FBI, investigation, firing, cronies and so on. WWT was so embarrassed they stepped down (and let American Express take over the business). And it lead to NYT writer, William Safire to describe Hillary Clinton as "a congenital liar". (When the NYT speaks truth about a Clinton, you know it's bad).

In the end it was a fiasco. And FactCheck, Politfact, and Snopes never found a reason to discuss this topic in all the times they fact checked statements around Hillary or her criminality. The cynical will assume this is because the knew it would show here as a liar, the DNC supporters will make excuse like, "it was old news", or "nobody brought it up".