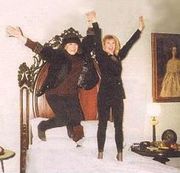 Then there was the the Lincoln Bedroom in the Whitehouse was being rented to high donors/contributors like it was AirBNB. While technically not illegal, it was certainly unsavory and showed a pattern in lack of decorum and tact that no other administration had had the gall to do before. It certainly showed that there was no monument, historical property, or government building owned by the American people that the Clinton administration wouldn't rent for their own personal advancement.

Maybe you're OK with this, maybe not. But it definitely lowered the standards for what was acceptable behavior. Since this was the new standard, Bush did something similar. The Obama's declared that no guests could stay in that bedroom to avoid the look of impropriety, so one of the few steps in the right direction.