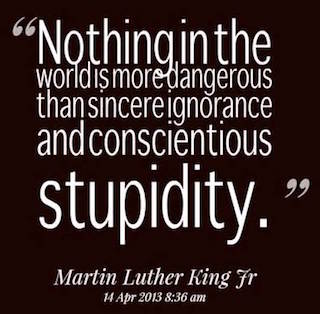 In software, you run into a problem: really dumb smart people. Their justified arrogance on something they have studied (programming, or a domain problem), makes them self-assured (arrogant), because they do legitimately know more than almost everyone else on that one topic. Heck most people can't even understand the problems they're working on, without 20 minutes of explanation. Then they transfer that arrogance to things they have no knowledge on whatsoever, making them very hard to teach, very resistant to learning, and thus often even less informed (more ignorant) than the masses on everything else. They're still not stupid, they are just everything they hate: someone whose ego is well ahead of their knowledge-base. Like a manager that not only tells them what to code (the features), but how to code it (because he once read a tech magazine and thinks he's now an expert). They're igno-arrogant. This is the ivory tower syndrome, where a brilliant chemist or doctor or researcher, puts his finger in the light-socket to see what happens. (It wasn't his area of expertise AND he wasn't humble enough to listen to those who are more informed). Think Noam Chomsky talking politics instead of linguistics.

The first step to knowledge is understand your environment

The politicos are desperate for change -- they have the furthest left President they've had in for a few generations, and might have in for a while. They need some victory, or to pillory the other side, otherwise they might pay attention to what a slimy repeat felon their top candidate is. So they need a distraction, they want to take others freedoms from them, and they need to politicize an issue by standing on the bodies of their preferred victims du jour (LGBT), to distract that Obama's foreign policy of apologies, appeasement, and drones, hasn't helped national security from real threats of terrorism (domestic or foreign). To have an intelligent and reasonable discussion would crush them, so they go for the megaphone of disinformation instead, knowing that their base, and hoping that enough others, will go along, to save them from the consequences of their own policies. Like claiming that domestic muslims aren't the threat, that Climate Change is the real problem. So back to a distraction with no hope or intent of helping, to see if their base chases the squirrel into the road, yet again.

Before we discuss reasonably, we need to figure out what the truth is. If all your arguments are false, then you're not reasonable.

Omar Marteen and Syed Farook didn't use assault weapons (fully automatic military weapons), they were radicalized muslims that committed acts of terror using a variety of weapons, including weak hunting rifles in stage makeup. They had a few more plastic parts, and were no more lethal than other rifles or pistols. If you are confused read What is an assault rifle? But the basics are, despite the demonification of black guns, a normal hunting rifle has more firepower, and a pistol or shotgun could have killed more people.

More people died because it was an assault rifle: False.

If Matteen used pistols (like most mass shooters), or shotguns, which both work better in close quarters, he would have killed more. If he'd used explosives, or fire, like in some other countries, he would have probably killed more. If the police hadn't of taken 3 hours to seige the place, half the victims probably wouldn't have bled to death (or been shot). More people died by bleeding out and waiting for the cops with guns to come, than died immediately by being shot. That's how it works. Gunshots are usually as survivable as stabbings, if you can get care quick enough. But waiting 3 hours, while people bled out, and others were getting shot -- that's why so many died: bad police response. In active shooter situations, you're supposed to storm in (in force), because waiting just increases death count. Why they didn't follow that procedure is what we should be investigating.

They bought these weapons right before using them on an innocent public -- and reasonable gun regulation would have helped, except for the NRA/Republicans blocking it: False.

Farook got his guns illegally called a straw purchase: this is a felony and proves that people willing to commit mass murder tend to ignore gun-regulations. Marteen did buy an Sigsauer MCX, that is not an AR-15. However, Marteen had been investigated and cleared by the FBI, he was a security guard, had a conceal and carry permit, and there's absolutely nothing that any proposed gun-control law by the Democrats, could have done to stop him from buying it. Under every dream law passed in the most liberal state, he still would have been able to get the gun. And Farook's was illegally gotten, so it wouldn't have mattered. Same with Marteen -- even if you could have dreamed up ways to prevent him from getting it, he could have gotten his wife or someone else to buy it for him. There's no proposed regulation that would have impacted the death count.

This was the biggest mass murder in American History: false

Anyone repeating that idiocy is preying on the ignorance of their base. The problem isn't the tools, it's the people using them and their intent. Banning box cutters didn't stop or slow terrorism in any way (even if boxcutters brought down 4 planes in 9/11) -- the fact that the public would beat the shit out of anyone trying to pull one (to hijack an airplane) does. Thus terrorists knew they had to change tactics, to less effective things like underwear or shoe bombs.

We need to protect the public from military weapons: false

You can buy class III fully automatic silenced assault weapons: real military grade weapons. You have to fill out a BATF Form 4, give the FBI your fingerprints (which they already have if you teach kids, work at an airport, or for a security agency like our last mass shooter did), and get a CLEO (law enforcement officer) to sign off (not something hard in most of Free America). Then pay your $200/item tax stamp: 1 for silencer, 1 for fully automatic, 1 for SBR (Short barrelled rifle), etc. (Not to mention wait about 30-90 days). And most put these in a corporation so they can pass the weapons to their kids. (More bureaucratic hurdles). The point being we haven't outlawed them, and they're not a problem -- because they're not really much more effective in the hands of the untrained -- so they don't bother to use them. (Gangs have used illegal ones in their wars, but mass shooters don't).

So he could have used a military assault weapon if he wanted. But he was either smart enough to know that it wouldn't have changed the death count significantly, or just didn't want the added scrutiny (because it didn't matter). Why doesn't it matter? Despite what the movies convince the gullible, spraying bullets wildly may be good to suppress a military charge, but 80% of the shots are going to miss everything and be wasted -- meaning he has to carry more ammo and go slower for the same carnage. Unless you're trained in tactics and working with a team, your lethality is not based on how many bullets you can miss with, but based on how effectively you place your shots, and how long you can delay help from arriving to the wounded.

This is about "reasonable" gun control: False.

There's no proposed regulation that would have impacted the death count in either case (or most of them). Most mass shooters use pistols, because they're more effective. So this isn't about banning assault rifles because it'll help, because it won't. You have to ban all guns, period. And then that won't help -- we'll just have more violent insurrections by those who had their rights take away and end up with bigger mass shootings like 77 dead by Breivik in Norway, or 385 dead in Beslan, Russia -- both with strict gun control. So the point is this isn't about a reasoned reaction -- it's about an emotional one, appealing to the ignorant using disinformation, and preying on their igno-arrogance to try to ram something bad through before we've had time to think about it or discuss it.

So the gun-controllers don't want reasonable gun control, or discussion, or they would have gotten informed before coming to the discussion. Most of them don't know a barrel shroud from a flash suppressor, but they know they're both dangerous because they look mean. They want bans and distractions. (Read: Guns: Control or ban?) But that doesn't touch on the complexity that you can carve the key part of an AR-15 out of wood, plastic, 3D print it, use a resin mold, bolt one together or make it in a machine shop with very little training. You're trying to ban something that a 12 year old kid can make. How effective do you really think that'll be?

Gun controllers want to felonize gun ownership for the enthusiasts, but doing nothing effective to address the problem is islamic radicals who want to kill us. They can't even say those words out of sensitivity and because "it doesn't help". But they can spit out "NRA" or "Republican Obstructionists" with no concerns about the feelings of their enemies.

So what did we learn?

When the left can talk to a topic without filling it with errors and disinformation, we can go from there. But until then, we should treat them like we treat all igno-arrogant people: (a) try to educate them (b) when that fails (because they're using their colons and egos to do their thinking and not their brains), then they should be ignored until they get more informed, reasonable, and can get their facts straight.

But they don't want a reasonable discussion -- they want to take away their neighbors toys, without a reasonable justification, so now they're willing to make up excuses, and make themselves look foolish in the process. 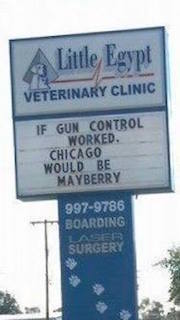 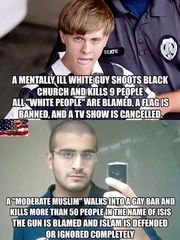