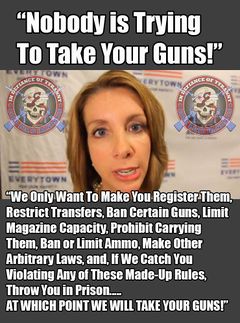 Some claim, "nobody wants to take your guns, we just want a few 'reasonable' controls on them". But if we pretend that gun control works (by ignoring facts and history), and we assume guns are the problem, then there is no such thing as gun-control: you need gun bans. Why would you tolerate a little murder or mass murder, if you could get rid of it all? Thus logic (and the history of incremental regulation) says they're lying. Either to us, themselves, or both. 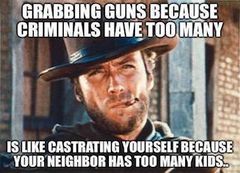 Let’s pretend that there was no second amendment and gun controller could get everything they wanted, without violent repercussion/insurrection or the natural ramifications (prohibition incentivizing a black market and crime). All evidence we have is that this is brain-dead wrong, but let’s visit the pretend-land that gun controllers live in, and let's walk through each of the obvious steps on their road to Dystopia. Feel free to correct any step where I'm wrong. Gun controllers will claim that all they want it X to make us a better place... then when that doesn't work, because you can murder someone with another kind of gun, they'll go for that too, until there are no guns left. So they'll never be happy with gun control until they have gun bans. And when that doesn't work, then what?

Again, that shows that anyone who claims they just want "reasonable gun control", or one or two things -- and then they will tolerate criminals or mass murderers just using the next kind of gun down the list, is a liar (politician) or a fool (their constituents). If you blame the tool, then all tools must be banned!

Everyone that knows the first thing about guns knows that every gun is dangerous, just like trucks and cars (that kill far more people per year), knives, fuel (gasoline/diesel) and fertilizer (bombs) or many household cleaners (bomb materials), fire, and pointy sticks (knives/swords), and so on. If you blame the tool, then you have to keep banning all the tools.... just like they're doing in dystopias like the UK, where they have knife bans as their stabbing rates (and knife murders) are far higher than the U.S., as are their bombings, home invasion robberies and other things that American gun controllers want us to be more like. Gun grabbers are luddites that prove the Dunning-Kruger effect, and they will keep moving back in time, trying to ban technologies from the 1790's, and when they figure out that the real problem is steel/iron (knives), they'll try to drive us back to the Stone Age.... and then they'll still only find out that clubs and stone axes can kill people too. Will they finally learn? I doubt it. If they could learn, they would have listened and learned about guns long ago (before forming their opinions), and they wouldn't be gun controllers in the first place.