Does gun-control ALWAYS lead to Genocide? Of course not every time... just more often than not. Or put another way, not all gun control leads to genocide, but every genocide was precipitated and facilitate with gun control. Since gun control has no good (positive) correlation with crime, suicide or murder rates -- the only question is why risk it? If gun control empowers the government over liberty and minorities, why take away a natural right, and start a civil insurrection over something that doesn't have a historical upside, and can lead to very big downsides? That risk/reward ratio seems pretty fucked up. 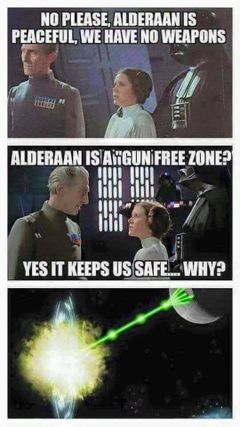 So what did we learn? I know... that's a trick question. If gun controllers were capable of growth, this debate would have ended in 1776, or when the first Democrat Government under Andrew Jackson started exterminating Native Americans, or when Lincoln's government allowed Sherman's march to the sea, or any of the other myriad abuses of power by governments.

Gun control is the belief that private citizens cannot be trusted with firearms, only governments can be trusted with such power. History shows the opposite, that there are few mass murders when both sides are armed, but states are statistically far more violent than individuals, and when only the state has guns, it usually doesn't end well for individuals (or minority groups).