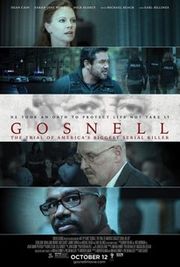 Gosnell is the Citizen Cane of our generation. Not that I think it was the best movie ever made (but then I don't think that of Citizen Cane either), nor just because one of the lead actors in the movie is Dean Cain. But that the forces of collectivism and certain powerful personalities tried to suppress it being made, and it told an important story about that suppression. As it stays truer to the facts, and is almost a reenactment documentary, it's even better than Citizen Cane. As the director (Nick Searcy) said, "There are three aspects to this story that are fascinating. What happened; why it was allowed to happen; and why no one wanted to talk about it after it happened." So no matter what side the Abortion issue you come down on, and whether you support Roe v. Wade or not (I'm pro-choice myself), this was a fascinating story on how much the "abortion at any cost" crowd allowed, in the name of their agenda. Since I value truth more than a political agenda, I found it very worthwhile, I suspect many that put their agenda above bad behavior will hate the movie.

The media not only actively suppressed news about Gosnell the Abortionist who murders hundreds of viable babies and ran the world's most disgusting abortion clinic for 30 years without inspections, violate drug laws, medical rules, health code, and anti-racist laws, all while suppressing complaints. But similar forces tried to suppress the story of what happened from getting told as well.

In the end it's a fascinating story the true story on the investigation and trial of Dr. Kermit Gosnell, an eccentric abortionist that had a 30 year killing spree that the political and media establishment tried to cover up. This isn't about 1st or 2nd trimester abortions, this is about a doctor that was routinely doing greater than 24 week terminations by birthing live squirming and sometimes crying babies and "snipping" their spines once born -- then there's the illegal drug distribution, practicing medicine without a license, the unclean conditions like re-using single-use medical instruments and spreading STD's among patients, Kermit's shocking eccentricities, the politicians and media's reluctance to cover the story. So many aspects that are jaw dropping in the way they rip off the façade of a fair and honest media, or anything resembling protecting the rights or health of women.

While the movie watches like a typical Law and Order episode (more on the legal side than the investigation side), they painstakingly shot and took dialog from the trial transcripts and evidence. The movie is PG-13, so it is not shot in an overly gory or sensational way: you see the reaction of people to the photos without it being a horrific anti-abortion placard marching around outside a planned parenthood (you can see evidence shots at http://www.gosnellmovie.com if you're so inclined). During the closing credits they show the people involved, or the various crime scene photos that inspired scenes in the movie -- and they did an amazing job of staying as true to the truth as I've ever seen out of Hollywood, probably because Hollywood establishment wasn't involved.

So even though it is in limited release, with virtually no promotional budget, it's one of the most important films of the year to see, no matter which side of the issue you're on.