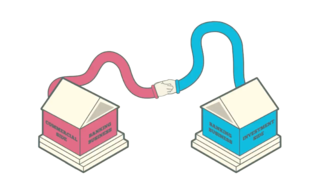 Glass-Steagall was the 1930's new deal regulation that said Commercial and Investment had to be separated. There would be no universal banks.

The New Deal was about increasing waste/bureaucracy and employing more people. Their Keynesian economic theory (long disproven) was that by making things less efficient (requiring more people to do the same job, and injecting bureaucracy), that you employed more people, gave them more money, so more people were better off. This is called the broken-window fallacy in economics (seen benefits matter, hidden costs do not); it is wrong and rebuked in economic circles, but it plays well in the political and media spheres. We also know Glass-Steagall didn’t do anything valuable (which was why it was removed bipartisan support).

How do we know?

No one has ever adequately explained how removing GS could cause a bubble or the credit markets to freeze, or how GS could have stopped the bubble, let alone why investment or commercial bankers would knowingly shoot themselves in the foot, why politicians would let them get away with it (if crimes were committing, prosecuting them would get them fame/votes), and so on.

They usually stop at step 1 — which is that leverage helped inflate the bubble and that eventually popped. OK. But Universal banks weren’t the problem, and how did the credit crunch happen? How did loaning them money fix it? And so on — they want to stop here, because everything else proves that their theory is more political than historical.

There are a few books that preyed on the desire for it to be the fault of Capitalism/Greed/Deregulation by Wall St., and then uses technical mumbo-jumbo, to sounds credible. But they are flim-flam. Like these:

The whole theory is that GS, "prevented the banks from using insured depositories to underwrite private securities and dump them on their own customers. This ability along with financing provided to all the other players was what kept the bubble-machine going for so long". Or so he claims.

If the problem was over-leverage, we should have had the Financial crisis in 1998, not in 2007

On top of that, the pure number of regulations doesn’t fully quantify how much larger and more complex regulation has gotten over time. Dodd-Frank for example is 22,000 page alone.

Those claiming deregulation are ignorant about history and congress (which is continuously writing new laws, and very rarely repealing old bad ones).

There might have been mistargeted regulation (meaning a failure of regulation), but there was no deregulation that allowed this to happen.