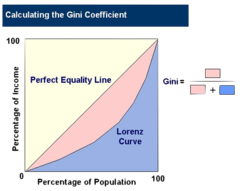 The Gini Coefficient (or Gini Index) came about when Corrado Gini (and Italian Sociologist) wrote the book: The Scientific Basic of Fascism. His idea was that you could make systems stronger than the individuals, if you just weeded out the threats to the collective and accepted fascism (democratic socialism combined with crony capitalism). His book, and the infamous “Gini Coefficient” he created, said that income should be evenly distributed, and if it wasn’t, then government should use that imbalance as an excuse to seize wealth and liberty, and redistribute it (fascism) to make things “more fair”. His coefficient is basically just that: a measure of how economically fascists (socialist) your country is.

Technically, the ratio was Corrado Gini's (and is meant as a judgement), but the idea goes back further. Max Otto Lorenz, of German ancestry, created the Lorenz curve, which is the idea that Gini's coefficient is based on. And that is just a form of Vilfredo Pareto's older and broader Pareto distribution.

Since progressives come in two flavors: (a) those who don't know history (b) those that try to hide it -- there's a lot of effort by the latter group, that's trying to use either Lorenz Curve or Pareto distribution to sound more scientific when talking about the Gini Coefficient, and to make it harder for people to understand where their ideology originates.

Ironically, Pareto felt that socialists economic ideas were severely flawed, and denounced socialist leaders as "an 'aristocracy of brigands' who threatened to despoil the country", and criticized the government of Giovanni Giolitti for not taking a tougher stance against worker strikes. But his attitude toward fascism in his last years is a matter of controversy, as he was certainly celebrated and used by them (like Gini), and he seemed to sympathize with them and their ideals of central planning to redistribute wealth and make things more fair.

Imagine you have two people in your society:

People use it as a way to argue that the lower the number (the less inequality the better), they're arguing that you should strive towards fascism: where the government controls not only the means of production, but all means (all income) and distributes it "fairly" (as defined by bureaucrats). The reason is because in a free society, some people are free to work harder, save more, and collect more wealth, and thus there's inequality. In a fascist society with perfect Social Justice, there can't be economic freedom (or the money would pool unequally).

Of course it takes about a 4th graders logic to understand the flaws in this index/ratio.

Ergo, what it is saying is that you should all be poor, miserable, live in a small country, with no opportunities, and be socialist: then you'll have the best index. This is demonstrated by countries like Cuba (with its .24 index in 1986) were it so much better than the United States by this metric, yet you can watch which way the boats are going.

Fair is often the opposite of Liberty

The basic assumption is that things should be fair. But the problem is that unequal talent and unequal effort (which is part of human nature and genetics), is going to lead to unequal outcomes. Period.

Assuming fairness, or any perfect ratio of distribution, ignores the realities of human nature: that those who are smarter, stronger, or richer, should not be punished. Attacking the gifted for their gifts, or the hard workers and wise investors for their efforts, must be every bit as morally/ethically wrong as attacking the handicapped for their disadvantages: thus doing so is inherently evil and immoral. It certainly isn’t any less unfair than the system you’re replacing, you just changed the victims.

Why is it any better to replacea meritocracy (with judicious amounts of luck), with a politocracy (where a political class gets to decide which people should be advantaged or disadvantaged based on political whims, or the political contributions of the special interests)?

Of course the political class shaves off their vigorish, which means they win more than anyone else, so it's good for them. How is that better for anyone else? Especially when most place it was tried, ended in disaster (and was a horrible and vile systems to live under).

And this freedom isn't just economic. Once you say "the good of the many, outweighs the good of the few (or the one)" as the Socialist Star Trek writers did, you're saying that the individual should have no self determination. That collectivism is better than individualism. And basically, that society should henpeck anyone that doesn't conform to the values/behaviors of the clique. It's a grey unitard Mao suit that everyone wears.

Not everyone that supports the roots of fascist economics, is of course a full on fascist. But there's a strong hint/correlation, whether they know where their ideology originates or not.

And of course not everyone that thinks there's too much income inequality and thus the state should steal things from people and give them to others it deems more worthy INTENDS for where the consequences of that philosophy has always lead in the past (to brutal tyrannies). Many have soft hearts and softer brains. Or as they say, "If wishes were fishes we'd all swim in riches".... but they aren't. And what matters isn't wishes but consequences.

Places with high gini-coeffecients have high liberty (and sometimes high corruption), whereas places with lower Gini Coefficients are more economically fair, and often poor shitholes with little liberty like Cuba, North Korea, or Venezuela. I guess you get what you pay for, not what you try to make other people pay for.

So think it through. Despite Cuba having a much better Gini-Coefficient than the U.S. (everyone is equally poor in Cuba), where would you rather be? There’s a reason the boats come from Cuba to the U.S., and not the other way. In the U.S. the poor may only get $30-40K in annual income (while others are making $100K, or millions), but your quality of life isn’t measured against the richest, it’s measured relative to where you were at. Even if they moved down the relative income ladder (they’re poorer relative to the richer), they climbed way up the absolute income ladder (and are better off, over all). Bill Gates, Steve Jobs and Warren Buffet’s income has no relation to my own. That’s why the places with the best gini coefficients like Cuba, North Korea, Vietnam, Cambodia, Venezuela, and so on, are all shitholes that people want to get out of. Which is why statists are trying to distract you with flim-flam and junk science like how much richer someone else is, to get you to walk the picket lines and protests (decrying the evils of the 1%), so they can pick your pocket and make their lives better at your expense.