The other day, I went and got my CCW (License To Carry a Concealed Weapon). Well, technically, I took the class to get my CCW, and have filled out my forms (it'll be a couple months before I get them back). And since I'm in the People's Republic of California, I only took the classes for the other ≈40 or so states (in Free America) that respect the Constitution and 2nd Amendment (called shall issue states): those silly rules don't apply in California, unless we get national reciprocity, then they'll secede. Still, it was an experience that I figured I'd share.

The first thing to remember is there have been many studies, and conceal and carry holders commit fewer crimes than the general population[1]. In fact, they have fewer gun accidents and shoot fewer people by accident than cops do. Which makes perfect sense for those who can reason it out.

The answer for most human beings, knowing that a gun is a major escalation and increases their odds of getting shot, sued, or shot and then sued -- is that they would only pull it out in the most extreme of circumstances. Those that don't, quickly get charged with a felony of brandishing a weapon (malicious intent), and they lose their gun rights, forever. So being a responsible gun owner is a quickly self-correcting problem.

We also know that there are a few categories of "issue" -- how many people can get licenses to carry. The spectrum goes from: 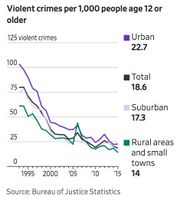 What we know is that during the 1960's and early 1970's we installed a lot of gun control, and with the exception of the civil war (or some turn of the century/great depression anarchy/violence), we saw our crime and murder rates go up.

Then a few cities, states or municipalities ignored the Constitution for so long, that they got slapped by the Supreme Court. The most famous are:

Are you beginning to see a pattern?

As more states enacted CCW's, and some cities/states were forced to give up their left-leaning anti-Constitutional positions on Gun-control, and never has there been a statistic that showed this resulted in a significant increase in crime or murders. If they had, the left and media would have been all over it, and used it to drive the message home that respecting the Constitution is a "bad thing".

To show you how absurd it is, Congress passed National Reciprocity, but it's hung up in the Senate. (Think of it like Gay Marriage laws: that one state can't ignore another state's Conceal and Carry permit).

You can see how they handled by reading Nancy Pelosi's tweets. The tweet demonstrates the point. According to her, those evil Republicans are "inviting" criminals, domestic abusers, and stalkers to carry weapons. Only, felons are not allowed to own guns, let alone carry them -- and all the things she mentions are crimes. And if they're guilty of crimes (convicted or not), then they're both not allowed to carry a gun for that purpose, and a law is already proven to be irrelevant to them (so a law against CCW wouldn't stop/slow them). So all that laws for CCW can do is allow a process by which non-criminals can ALSO carry weapons (as well as criminals), if they so choose.

You actually get dumber listening to Pelosi, or other gun controller. [4] 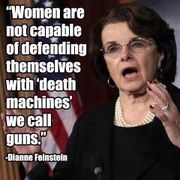 While this quote by Feinstein is unproven (and I'm skeptical of it), it does fit fragments of what she has said elsewhere about guns (being killing machines, and all civilians (Women or otherwise) are unable to handle such awesome killing machines: unless they're politicians, the military or police). In fact, she's said worse like if she could get the votes, she'd ban every one of them (screw the Constitution), or that in a mass shooter situation, if you lay down your gun, the mass shooter will do the same. I'd like to see her try that one.

Which goes to prove: never trust a Pelosi, Feinstein or other Gun Controller.

So the class I took was by Gun Kraft in San Leandro Rifle & Pistol Range (basically Oakland, CA), from a very good instructor (Robin Yang). I went with a friend, so we made a half day of it, and grabbed some In-N-Out as a reward for completion.

It is a 5 hour training, and would allow us to get our CCW's. Some states require more, some less. But this would allow us to apply for one or a few of the states that allow non-resident CCW's. (This is a convenient thing to have if reciprocity ever passes the Senate: which could easily happen if Republicans win big, or Democrats take back congress -- as with the Republicans being lame ducks, they have nothing to lose by passing it).

This course covered basic gun operations, safety, the law, different ways to carry (and the advantages), safety again, scenarios of when to fire or not (using airsoft guns), proper draw techniques, safety, and quite a few case studies (basically YouTube videos) of how things can "go down". It's sort of like a Drivers-Ed class for guns.

And of course they do the prudent thing by explaining that 40 hours of training is certainly not too little for people's continuing education. The problem is every state, and even districts vary, so you're not going to get on-top of everything in one class. (E.g. like a learners permit, this is the starting point, not the conclusion in training and certification).

I've already taken at least 40 hours in my life, of various forms of combat shooting courses. (And a few thousand in Martial Arts in general). But still, every time I go, there's something new to learn, or at least refresh and remind myself of. So they're never a waste. Like all skills, it's fun to practice and master.

In the class we had ≈10 people -- 9 or which seemed competent, engaged, and asking questions about this or that (showing interest in really knowing the law, or how to act when you're carrying). Only one guy seemed less than proficient: and my concern wasn't about his lack of proficiency with operations (he had lousy trigger discipline, poor understanding of operations, etc), he also didn't seem very good/interested in listening to people who obviously had more experience than he did. But such is life.

To me, that demonstrates the reality of CCW in general. Since most people are fundamentally good -- if you gave everyone a license to carry, then the gross majority of the time, guns would only come out at appropriate times, and most people are going to want to know how to operate the tool safely (just like cars). But there's often one knucklehead, that in a car will speed, drive like an idiot, and just be a bad citizen. Fortunately, that's usually a self-correcting problem.

In the end, I enjoyed it -- and it's sad that California is going to fight to the bitter end. They're against the Constitution, common sense, and willing to ignore all the evidence we have that their forms of gun control (instead of teaching gun responsibility), doesn't actually work. And they're looking for the outliers -- the one idiot, to "never let an opportunity go to waste", to take our liberties away from us, for their own good, of course.

Borrowing from something Stefan Molyneux (as have others),

There are cases where CCW holders shoot people. The numbers are often exaggerated by throwing in Suicides (which has nothing to do with guns). This anti-Constitution site shows 1,100 total over 11 years, with >90% being suicides -- leaving <10/year. And it only does that by over-counting (adding individuals to more than one column, or not counting that some were cops or military). So the point is that you can find a handful per year, if you look hard enough. Of course compared to half million or so that died to murder/suicide over the same period of time, it's nominal. And the facts are still that CCW holders are far less likely to commit these things than the general population.