Do you notice any conflict between these two definitions? If you are that much smarter or different in how you think, what are the chances that you will think and perceive things the same as the "average"? The answer is, "not bloody likely".

Abnormality is the new normal

The abnormality of your IQ equates to an abnormality in the way you think, and often in the conclusions that you arrive at. To a genius, the masses are amazingly irrational and illogical, and they are insane (irrational), and the opposite is true.

So when people say that genius is close to insanity, they are wrong; by definition, genius is insanity (an abnormality in the ways of thinking, and in conclusions and behaviors). At least in common usage. Clinical sanity is something else, but I'm not trying to define criminal or clinical insanity, just sanity as in the way most people look at things.

IQ means "Intelligence Quotient", and is a measure of deductive reasoning, as defined by many intellectuals and how they perceive reasoning should be. Hmmm... what if you aren't an intellectual, or don't think the way they do? Chances are you won't be rated highly. Does that mean you are less rational, or differently rational?

IQ is measured through tests, with all the flaws inherent to testing. It is a test created by one group, often to test another group. It works OK if you are in the middle of the bell-curve, or slightly above normal (where most of the test creators are), but if you fall too close to either end of the curve (too far from the standard deviation), the test writers can't handle things and just don't understand the perspectives -- so the tests become far less valuable.

The point is that a test can only test for one small subsection of thinking (logic), and only to a point, so you can't take it too seriously. It has nothing to do with intelligence. It has a little to do with logical problem solving, and a lot to do with measuring how much you think like the testers. And it only is a snapshot at one point in time.

Contrary to what many claim, you can learn to test higher (or lower) on IQ depending on your goals in life, and where you are in life and what things you have taught yourself to value. I've altered my IQ on test, both ways. The brain is a trainable organ (wetware). You can alter the chemistry of your brain (long or short term), and you can alter the neural pathways -- which are the ways in which we think. People can make themselves insane, or bring themselves back to sanity, both through drugs and through training thought behaviors. People can change, most just won't spend the energy. You are in control of your reality. You are what you do, and what you believe, and you can change both. So if you don't value silly tests or adapting to ways that testers think, then you will probably score lower on IQ. If you want to practice it, you can increase it. There is both nature and nurture; we will trend towards or away from things - but that isn't the same as completely predestined.

Just issues like stress, sleep, focus and determination can alter personal scores on tests; but many will deny that for IQ. Why? They want it to be a pure objective statistic, and not the subjective measure that it is. 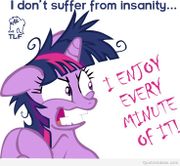 So what good is it? You can learn how you think compared to the norm or the testers; then chuckle, have fun. It is a metric; but just not a very important one.

What it isn't good at is measuring much of value. There are serious problems with how people interpret the results of these test; the testers, parents and kids. It pigeon holes them into a certain grouping in society, and expects them to live up to the role that they put them into. As far as I've been able to tell, this grouping has little if any value in real life. Some of the most successful people that I've known are not even close to the most logical; or at least don't test as such. I'd consider some people far smarter than me even when those people have a far lower IQ than I do. I've met some that are far above mine and both irrational, and much less adjusted people overall.

This point of view annoys people with a vested interest in the tests. There are groups that expect certain scores on tests. I annoy them by pointing out that if they do value the test results, then they have to value my superior intellect and realize that the tests are bogus. If they don't value the tests, or my scores (and "superior intellect"), then they prove my point. Since I've tested above some of the most gifted, they are in quite a pickle. Of course the irony is that it is just a statistic. It shows trends; not individuals. And even if you are in the one in 1,000 range or above, there are still six million people in the world that are smarter than you.

So I think IQ is a measurement; just not an accurate measurement for "smarts". And most of my, and others, smarts not come from just our logic, but our ability to apply it along with our personal drive, artistic leaps, faith, biases, desires, and so on. Here's a little truth table.

What I learned from IQ

Here's an idea. Take someone who already solves problems measurably differently, and thinks differently, and is sitting on one end of the bell curve with most of humanity "beneath" them or at least different than them. Now give them some labels; braino, nerd, genius, geek, and so on. Do this to a child who hasn't adjusted emotionally. Now give him a superiority complex in brains, tied to emotional issues with being beaten up regularly (verbally and/or physically) for being different. Maybe you can put them in special schools for the gifted, and skip them ahead a couple of years so that they are further isolated from their peers. Is this the recipe for good social adjustment?

Chances are those poor bastards will come out completely asocial, shunned by society, precocious, arrogant, and they will measure their entire self-worth in their intellect. Sad? I think so. This normal track for the gifted is a recipe for is total maladjustment.

For kids to adjust, they need to fit in and have a peer group. That peer group needs to be the rest of society, and not just a small subset of people that are "above" the rest. We need to teach these kids to "not be so smart", and diversify their interests. Stop thinking different, and start pretending that they think the same. I'm not saying be stupid, or get bad grades, or give up their dreams. They need to be who they are. If they want to be an insufferable, arrogant, self-righteous, outcasts then follow the path laid out for them. However, if they want to be a part of society then they are going to have to "lower themselves" to come down into the muck and mire with the rest of us, and not pretend that they are above it. Not put too much value in their genius or IQ's and put more value in being who they are, and hopefully get a little more balance in life.

By the way, those that "fake" being normal, will actually become more normal. Because we are what we do, or as some say, "Fake it 'till you make it". By doing something, you become that something. If you behave like a good person, you are being a good person. If you behave like a crook then you are being a crook. So you are your actions. If you act like a normal person, and can interact with them, then you become one - which is far better for them and society.

Ironic, isn't it? At least then they can dupe the masses into accepting you, and tolerating your differences. The alternative is what I call Law of the henhouse; where some in society will try to peck you to death just for being different.

As if we haven't done enough harm with testing (and over valuing the results), now we are trying to add more. We have emotional quotients and others. They are cute metrics that can be used by adults to lightly look for weaknesses and growth opportunities. But for kids, they and those around them, put too much stock in them, and screw them up.

A difference between the Albert Einstein's, Seymour Cray's, Pablo Picasso's of the world, and all the other more normal appearing people may have as much to do with their desires, and unbalance, as with their abilities. Some people have learned to fake being normal well enough that they can fit into society and be accepted, and reap the rewards - while others have contempt for society because of how it has treated them. Ironically, it has probably treated them like that, because they bought into some of the rules in the first place; and then they rebel by ignoring the stupid rules of human social interaction that would allow them some of the peace they are missing. In the end, society sees them as eccentric or insane because of societies inherent intolerance of that which is different.

Many with high IQ's are not happy or well adjusted. Many of the unbalanced were not geniuses; they were geniuses in one area. But what makes people better, happier and more successful humans may be that balance. If you keep telling them that unbalance is better, they might believe you and screw up their lives.

Society needs to stop pretending that "high IQ" means "better". These tests are cute, and have very narrow value. Having an high IQ is a nice tool in life; probably not as nice as being born rich or well connected, but helpful. And it is important to remember that it is one minute variable in the complex formula that makes up a human being.

Don't accept pigeonholes for you or your children -- even when they seem positive. Keep an open mind, and keep on learning. Certainly don't agree to rate yourself as other naively rate you -- you can become far more (or far less) than others think you can -- that has been proven by many individuals throughout history. The choice is yours.