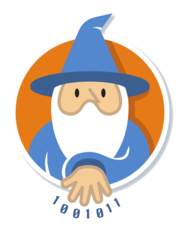 Geeks are not wizards. Too many people in this world look for "authorities" then trust them blindly on topics they don't fully understand. Since most people don't understand computers, they tend to find their local tech nerd and trust them blindly. Not a good move.

There are two types of people in this world; those that have to divide everyone into one of two groups, and those that don't. And there are two types of computer people in this world; those who know what they don't know (and will admit it), and those who pretend to know what they don't know. One of the hardest things for non-geeks to do is distinguish between those two groups.

Arthur C. Clarke said, "Any sufficiently advanced technology is indistinguishable from magick." This statement is most profound when watching people new to computers either try to buy or use a new computer. To most non-technical people, everything in computers is just "magic", so they go to the wizards and take their word at face value.

The thing that happens most is that people decide to go to a computer store, talk to a neighbor-friend, or read some computer column, and take whatever advice is offered as gospel. This amazes me because those same people can be amazingly informed, properly skeptical and wise people in all other aspects of their lives; but they pretend that they don't need to be informed buyers or users when it comes to computers. Like for some reason no one would ever give them bad advice in the digital universe.

The problem with this is that they must treat the wizards like they have some super-human knowledge, or at least are not burdened by human biases, egos or desires. And if you believe they have that, then I hear there are a few bridges for sale in Manhattan.

The good news is that it is very hard to make a bad decision in computers. Computers are becoming so powerful and so inexpensive that you are really getting an excellent value no matter what. Sure, there are better and worse deals, and technology is evolving so quickly that in three months there will be something newer/better/faster/cheaper; but overall, getting any computer is a complete bargain when you compare it to not having one. The bad news is that there is lots of bad advice to be given; and decisions made from a position of ignorance may work out anyway, but that doesn't make it a good idea. You need to be very selective about who and where you get your advice.

The way I often distinguish who I should listen to from those I shoudn't, is to ask them something that they don't know and see how they respond. If they admit they don't know, that's good. If they admit it, and then go and research it or ask questions; that's better. (Their drive to learn is stronger than their ego or personal agendas). If they start to bluff, bluster, distract or try to swamp you with techno-jargon, then I'd walk away. Taking advice from people who have to bluff or can't communicate well comes with a strong, "caveat emptor" (let the buyer beware). If you truly understand, then you should be able to talk with others instead of at them.

Just use common sense when gathering your computer information. Never trust a single source; verify. Know their bias; everyone has a reason for why they think what they think. Figure out why they think it. If they are using a computer for programming or art, and you are using it for technical drawings or video, then your biases may not match. And remember that popular opinion is not always right; unless you think that the VW bug is a better car than a Mercedes Benz because more people buy the former. Figure out what you want, and why, and you stand a much better chance of making better decisions.