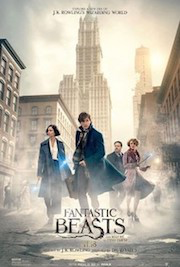 I’m not a huge J. K. Rowling or Harry Potter fan: I found the movies entertaining enough (say 3-3.5 stars out of 5), but nothing extraordinary, and I didn’t read the books. I just thought they were good enough to keep watching the plot-line evolve. This was my favorite of any of them.

Normally, Harry Potters get caught up in the tech of magic, and the heavy ensemble cast of characters. They’re explaining to you about this and that, and who is doing what, that you’re supposed to be so enamored with all that, that you forget about the thin plots and that they kind of don’t get anywhere. Don’t get me wrong, the point is the immersion in this other world (fantasy), and it’s good enough at that. But they were always sort of “meh’. I liked them as dark popcorn flicks, but nothing else.

This movie being the first of at least 5 in the series, it had a heavy burden: to introduce you to a lot of characters, and plot-lines that will be filled in later. And it did it in a way that it completely stood on it’s own. You didn’t walk away feeling like you needed to watch the sequel to find out the rest of the story (like happened in the other Harry Potter films). I left believing there could be more, or be completely happy with this story on it’s own — and I far prefer that to the serial “come back in 2 years to find out what happens next” type films.

This one didn’t abandon the darker filming style, or surrealism, or magic — but it played much better and more fresh than the others. It was in the same world, sort of. What would the secret world of wizardry be like in turn of the 20th century America (how would it vary from the U.K. version) — and how would they take to a bumbling Hogwarts reject?

It plays like Dr. Who the Fantasy Animal Zoo Keeper — and that’s not a bad thing. The style works, and is one of the more visually stunning in the series. Instead of just “Harry Potter with different names”, it played as unique and more nuanced. And Rotten Tomatoes did the 75/83 (reviewer/audience) split. Which says that as “art”, the reviewers thought there was nothing new/unique beyond just characters and plot. While the audience that looks at a movie for entertainment (and not as “art”) found it more enjoyable. That 83% is higher than most of the other Harry Potter films in audience ratings.

So if you want a new Harry Potter series to follow, this is it. You know what you’re getting with the franchise, and it’s worth grabbing some popcorn, taking the kids (or not) and watching it in 3D.