From iGeek
(Redirected from FakeRace)
Jump to: navigation, search

The FakeHate grievance industry is so broad, that they are branching out, and have to have multiple divisions. Hey, you get what you incentivize. and the virtue signaling left rewards victimhood -- so people are lining up to join in. This is just the subset of FakeHate that is specifically about fake racial crimes.

Everyone knows there's Real Hate, and real racism... but in America it is extremely rare (that's what makes it so newsworthy). Less rare seems to be the false accusation of race and hate. And it helps to remember that for the last few decades (at least), blacks and other minorities are far more likely to attack/rob/murder whites, than the other way around. Whites are the new minorities, but the intersectional marxists haven't noticed that yet, and are still using "White Privilege" as an attack, yet if that's true, why do Asian and Indians out earn whites, and why do half minorities always seem to take the privileges of being a minority instead of taking the "privileges" of being white? You get what you incentivize, and victimhood is a strong lure.

When the supply of real racists can't meet the demand for intersectional victimhood, then the left will have to make it up. And this is a small list, so that people can understand the problem. When your side is making shit up all the time to pin on the other side, or make themselves look good? They've lost the moral high ground (assuming they ever had it): FakeRace : 24 items

MLKs dream - There's a school in Washington State that removed Asians as "persons of color" because they were performing too well. Indeed, Asians (especially immigrants or first generation) outperform whites in all categories: both far east "Orientals" and Indians. Women outperform men in college admissions and graduations. Black immigrants also outperform blacks and often whites, and blacks raised by whites or Asians outperform other black or latino Americans. And this isn't just one school, this is companies and others that are changing the racist Affirmative Action into the more racist URM (Under Represented Minoritis) or BIPOC (Black Indigenous People of Color) movements. MLK had a dream. That dream was assassinated by the left... both in April 1968, and it is re-assisinated by the far left every time the dream twitches to this day. When reality doesn't fit your agenda, you must keep murdering the truth. Institutional Racism - There's this fallacy invented and propagated by the far left (and part of Black Conspiracy Theology), meant to undermine America, called "Systemic Racism" (aka Institutional Racism): the idea that racism in ingrained into the culture and legal or corporate policies.

While it is true that Democrat party was founded on Andrew Jackson and his Indian extermination campaigns, and Democrats created a lot of institutional racism with their KKK, Jim Crow laws, Woodrow Wilson, or in the 30's with FDR's New Deal, Social Security, Wagner Act (which excluded as many blacks as possible). Republicans have been trying to wipe it out since before the Civil War, and including the Republican civil rights acts of 1957, 1960 and 1964, the Fair Housing Act of 1968, the Equal Employment Opportunity Act of 1972. For my entire lifetime, there's pretty much nowhere for institutional racism to legally hide: every attempt is rooted out and eliminated. There is the exception of Democrats false flag of "affirmative action" (anti-majority racism). But with the exception of anti-white/asian policies, there are no policies (official or unofficial) that allow cops to assault civilians based on the color of their skin.

Despite all recent evidence is that police abuse is actually less common against blacks (relative to murder rates), every time there happens to be a police (or civilian) abuse problem against someone who is black, the old leftist tropes are trotted out in order to divide us for political gain -- while similar assaults against Whites, Latinos or Asians are ignored. Once you get past the surface Fake victims like Trayvon Martin, Eric Garner, Michael Brown,. Finally, when an obvious abuse of power video came out (George Floyd) the nation was ready to burn, and the DNC and their operatives were there, flinging matches. The rioters, protestors, DNC operatives and their media all propagated the same lies (1) that this was an institutional problem (not individual) (2) that the officer wouldn't have equally abused a White, Asian, or Latino that was resisting arrest, in the exact same way (3) that justice was already being served against the perpetrator (Officer Derek Chauvin), without any marches, riots or looting necessary in the first place. Americans are united in that we all oppose abuse of power of any individual (Black or White), where the Democrats succeed in dividing us is that many don't believe the lie that this problem is systemically ingrained in our legal code, and that the solution is supporting violent radicals (and rioters). The reason these events are newsworthy is because of how rare they are.

George Floyd - Another pillar of the black community (meaning insane drug abuser with a violent rap sheet) violently resists arrest, and dies of health problems (heart condition) combined with a drug overdose, and BLM uses an edited video and a false narrative to convince the gullible and violent to believe George Floyd was killed for being black, instead of dying of an overdose. And then the left does what they do: make excuses to loot, riot, vandalize, and divide us. Fake victims - Here's a list of some of the Fake Victims: Trayvon Martin and George Zimmerman • Alton Sterling • Micah Xavier Johnson • Alfred Olango Shooting • Breonna Taylor • Eric Garner • Henry Louis Gates • Jacob Blake • Keith Lamont Scott • Michael Brown • OJ Simpson • Philando Castile • Rodney King • Sandra Bland • Valerie Plame • Dr. Seuss is racist - 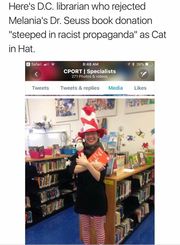 The media/left was titillated when an elementary school librarian rejected Melania Trump's gift of several Dr. Suess books with a condescending letter claiming it was, "racist propaganda". The same hypocrites forgot that President and Michelle Obama read these books to children... on multiple occasions. Jesse Jackson did the same. The librarian had no authority to reject the donations, and was told by the school district to stop political grandstanding. The rejection was national news, these corrections weren't newsworthy... and that tells you all that you need to know about the media's credibility. 2020.06.25 Isaih Martin - Isaih Martin (BLM activist) claimed in a viral tweet that racist messages were left on his car. Video shows he placed them there himself. He is now refusing to cooperate w/police, Texas A&M and the cops are not pressing charges or punishing the bad behavior. When the demand for racism exceeds the supply, left wing activists will fill in the gaps themselves. Which proves their imagination of the problem exceeds the reality of it, or they wouldn't have to fake it. 2020.06.21 Bubba Wallace and the Noose - Wallace's team got hysterical and assumed racism because there was a "noose" in his Garage stall at Talladega Superspeedway, and he's black, so racism... it must be a bigot/hate crime. CNN especially, but other FakeNews outlets did double time on sensationalizing this... only the noose was there for months, and it was just a garage door pull, and was obviously not targeting him, since they had no idea who would have that garage. Then he went on to CNN and elsewhere to claim, "it was a noose" and double-down on dumb. 2020.05.11 Rashawn Smith -

The Georgia (GBI) arrested and charged Rashawn Smith (20) for making terrorist threats. This guy (black) was behind a hoax Facebook account pretending to be a racist white Trump supporter who promised to kill pro-Ahmaud Abery protesters in a mass shooting. 2020.03.04 Racist Graffiti in Mississippi - A black man (Trumaine Foster) in a Mississippi suburb of Memphis had his vehicles spray-painted with racist slurs ("Leave nigger" and "Trump"). Foster has since been arrested for the hoax, insurance fraud, and tampering with evidence. (He has a body/paint shop, and likely did it for the money/publicity). 2020.02.26 Racist Graffiti in Philly - Earlier this month, racist slurs like the n-word were sprayed on a mural honoring black civil rights activist Cecil B. Moore.... and the cops released the video/pictures a couple weeks after the drama over the racism, and it was a black guy that did it. 2019.09.20 Forced Hair Cutting - A 6th Grade Virginia Private school girl (who was black) accused three white classmates last week of forcibly cutting her hair... and that made national news. The FakeNews used it repeat their fabrications about national race problems or worse, coupled it to Jeff Pence (VP) and his wife. Racism is everywhere! Now the accuser admits the allegations were false. The problem isn't just with the people who cry wolf, it's with the media that sensationalizes these FakeNews stories for clicks (chasing the algorithm before fact checking).Some are more responsible with corrections than others, but corrections wouldn't be necessary if we had responsible journalism waiting to get the facts, instead of sensationalizing every accusation with national front page headlines, and back page retraction. 2019.07.27 Baltimore -

Trump tweeted (paraphrased) two facts: (1) "Rep, Elijah Cummings (D) bullied border agents about conditions at the Southern Border (2) Cummings Baltimore district is a disgusting, rat and rodent infested mess. And maybe he should focus on cleaning up that dangerous & filthy place. Well, the left and their media (CNN, NBC, NYT, and other FakeNews) hates truth. So they screamed, "Racism" to distract. To them, it's irresponsible of the President who has done more to help the black community than any other in my lifetime, should point out we should do more to improve the conditions of black citizens in Baltimore?

Bernie Sanders, Orkin Pest Control, NYT, PBS, Elijah Cummings, all complained about the "infestation" before Trump did. Are they racist too? The Trump administration gave $16B in 2018 to help with the problem, was that racist? The left can't stop with the Fake Racism attacks, and would rather attack Trump than address real problems for minorities. So who are the real bigots?

I'm sure I'll be called a racist for trying to track this stuff. Any truth that discredits the far-left's histrionics is racism (or some other bigotry). But the point here is to remind people that while America has flaws, it is one of the least racist countries in the world. And "white on other" racism is so rare, that they grievance industry has to invent racism where there is extremely little. While the Democrats hate-mongering has made minorities feel more persecuted and more entitled to attack people over race (or fake race allegations) than the other way around.