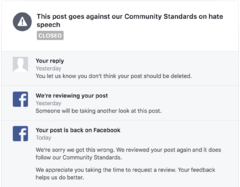 I got FB-slapped. Imagine my surprise when I go to check FB and am forced to re-log in, and get a, "This post goes against our Community Standards on hate speech" welcome dialog. Hate speech? Me? What are they talking about? It turns out the accession is a crime in FB land: so I was warned by automated systems. I appealed, and won. But the fact that guilt by algorithm or accusation is still not a good thing.

It turns out a little douche-nozzle-troll didn't like something I said in a group, had scanned my page, and called me a racist Trump-loving Fox-News watcher, and reported something as "hate speech" because it had a few trigger words, and logic that went beyond his pea-brains ability to comprehend.

FB's automatic theology checkers probably saw a few keywords, and punished me by blocking my post, and a somewhat condescending note about reading their guidelines.

But it had an appeal option. I appealed, and the human checker was much more able to get the nuance, and my post was restored. So it wasn't the worst experience possible. However, a much better one would have been to have a human checker validate BEFORE blocking and calling me a hater.

A co-worker was confused about the 57 flavors of "Gender", and so I ranted about the difference between Gender, and Sexual Preference. But I'm a liberal (Libertarian) guy, that has a few trans-friends, a bunch of gay family members and friends, and am pretty tolerant and un-judgy. I want people to leave each other alone, but that includes the preachy left not micromanaging the right, as well as the other way around. So here's the accused hate speech:

In the world of the perpetually offended, that was hate speech. But the only thing I was hating on, is over-reactionary intersectional Marxism and trying to micromanage fairness, instead of just living it. Treat people the same, regardless of what they do in the dark, or light. As long as they aren't hurting kids, or forcing people against their will, it really isn't my business. And if more people acted like that, instead of reporting truths that hurt their feelings on Facebook, we could be a better society.

So he reposted it, and it got pulled... again.

Not only did they fail to explain what it violated, they didn't give him the option of disputing it. It just simply said it was taken down and then the only link was to their Community standards.

I wear being censored by fascist assholes as a badge of honor. Sort of a lightweight version of a Fritz Gerlich award, without any of the risk of capital punishment that the real Fritz suffered for trying to warn the world about where bullying tyranny of the left might end. Sadly for him, he was right.