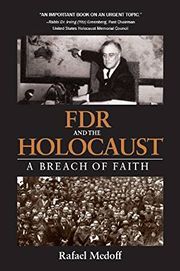 Many years ago, I was discussing WWII history (which I've always had an interest in) with Historian friends -- and they came up with some claims that were so foul that I just couldn't believe them. I scoffed and was supplied with overwhelming evidence to support their claims, and I was so disgusted by what our nation (and our President) had done, that I ignored facts and just denied that it could have happened. I became an unreasoning person -- and it took me years to open my mind to the possibilities that are the facts.

What was so detestable that I couldn't accept? Roosevelt and the State Department knew about the Holocaust from it's inception and not only did nothing about it, but intentionally hid information about it, and prevented more Jews from escaping. FDR played politics the whole time, and only did what was in his best interests, knowing what the results would be to many innocents. FDR only acted in the best interests of humanity when forced by public pressure and exposure. It was this event that got me digging more into FDR's persona and character and how I found out about the rest in these articles.

So now when I hear people talking about how FDR saved the Jews, or how he was "the Jews best friend", and yes, there are people that say this with a straight face -- and even books or documentaries dedicated to the progressive alternate reality. They'll point to some Jewish appointments he made, or that he didn't bad mouth them in public. But ethics are what you do when you think nobodies watching.

I often point them to this article or facts in it, which show his real ethics. It doesn't change their minds -- as most act like I did initially. Just their resistance to growth seems a lot higher than mine was; "That can't be true", "I can't have been that lied to", or "that's too disgusting to think about for our President and Government". They close their minds and usually open their mouths. But I know that someday, they'll either grow and learn to question what they'd been taught. Or they'll die ignorant. But either way, I tried to point them in the direction of the evidence.

Breckenridge Long, the Roosevelt appointee to head the State Department, was intentionally and knowingly blocking the immigration (to the U.S.) of millions of Jews scheduled to be exterminated -- knowing what the results would be.

This was done. Which goes to show the effectiveness of Bureaucracy and over empowering Government -- 190,000 people could have escaped the atrocities being committed by the Nazis if we had just followed the immigration laws we had in place. Thus, while people were scheduled for death, and he knew it, they were appealing to our nation (embassies) to escape -- and we didn't have the respect for them to tell them that we didn't care. Instead we put them through an impossible maze of red-tape and run-arounds until their time ran out, and they were killed.

FDR seemed to know exactly what was going on, and I find it unlikely that he was unaware or unable to act in this case -- suddenly the omnipotent leader who could force through any cause (unconstitutional or not) was powerless over one of his appointees or bringing something to the publics attention, yeah right. Responsibility for these actions at least partly belongs on the President.

The State Dept. not only intentionally delayed the Jews from escaping their fates, but they made a concerted effort to prevent the information about what was happening from reaching the American public. They were literally and intentionally blocking cables and information about the Holocaust from being transmitted. Again, Roosevelt's centralized authorities and power over information helped squash the truth.

When the stories of the Holocaust did reach the press, our Newspapers helped by burying the stories in smaller articles in the middle pages.

Despite our State Depts. best efforts and delaying tactics, after years it became public knowledge, and the U.S. and Britain were finally embarrassed into holding a Bermuda Conference to try to "help" the Jews by appealing to Germany and her Satellites to give the refugees to us rather than to exterminating them.

he British said what both sides had felt all along (and why they delayed so much): "There is a possibility that the Germans or their satellites may change over from the policy of extermination to one of extrusion, and aim as they did before the war at embarrassing other countries by flooding them with alien immigrants."

We knew that Germany wanted the Jews gone from Europe, but that the Germans might just hand the Jews to us to get rid of them... and that if expatriation wasn't possible, that they might turn to other means. (The Final Solution was done after all the others, driving them out, and working Jews to death, hadn't worked). But FDR didn't want all those dirty immigrants. So once the conference was held, it's sole purpose was to play politics and NOT achieve any results:

The conclusion was that "no approach be made to Hitler for the release of potential refugees."

In other words, we'd rather see Jews killed than allow them into our nations (or even to go to Palestine). And remember the context:

FDR was aware of all this, and far more -- but anti-Semitism was rampant in the U.S., and it would be unpopular to make a real difference. Most avenues of escape for the Jews were blocked, or choked down to a trickle by the U.S. and the British -- the British even blocked emigration to Palestine. Of course in all these cases FDR did nothing to help, despite knowing exactly what was happening. We wouldn't save and Jews, and would not even appeal to Germany to stop.

We (the U.S., Britain and FDR specifically) had many opportunities to save hundreds of thousands if not millions of lives, and not only didn't we expend the effort to help, but in many cases we actually expended an effort to prevent those lives from being saved.

FDR knew what was going on, and was capable of changing it... if he had cared.

Did the reactionary President react? Did the man of the people try to help the people? The whole time he was delaying, FDR was aware of exactly what was going on.

Finally, after American Jews publicized what was going on, against the efforts of the Roosevelt administration, and after demonstrations and a lot more proof came out, then in 1944 President Roosevelt was forced (by public pressure) to established the War Refugee Board -- which miraculously had some success in rescuing the lives of as many as 200,000 Jews.

FDR did nothing until forced.

These travesties of course are far larger than just the President, and are an embarrassment to our whole nation and the many involved. There was a conspiracy of silence by many in our Government, and other governments -- but that conspiracy included the President.

So while FDR wasn't responsible for the Holocaust, I still ask myself, "How many more lives could have been saved if FDR had cared?"