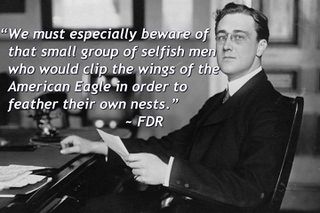 Graft is taking profit from one's political office (or taking money for their influence). The politicians of today have nothing on FDR, not even the Clinton's. As Governor FDR stated on many occasions that Public Officials should not be living beyond their means (or getting economic gain from their political influence). FDR specifically said '''that financial gains should apply to members of a politician family as well as the politician himself.' FDR dismissed one Sheriff (Farley) saying, "What of a public official who allows a member of his family to obtain favors or benefits through his political connections?"

Like all things FDR, if he said one thing, he was doing the opposite: FDR was publicly against graft, and one of the largest recipients of it in history -- both directly and through his immediate family. His Son's (James and Elliot) both became rich men through FDR's influence peddling. His wife made millions from foreign gifts, ads, and other forms of payola. And FDR stole rare stamps from the post office, had the government pay for home improvements, and deeded his property to the government so that they would pay the taxes for him. Dirty by his day's standards, criminal by today's.

Corruption - All in the Family

It isn't like just one of them suckled at the teat of corruption, the whole family was involved. And this wasn't just Chelsea getting paid exorbitant sums for no experience and a mediocre academic record, this was all of them being far more blatant.

James Roosevelt (FDR's oldest son and law school dropout) was to become an insurance agent while FDR was in office.

Elliott Roosevelt decided to follow in his brothers footsteps and went into "deals and promotions".

The family payoff wasn't just the the sins of the sons -- Eleanor (Wife of the President) did even better. She went from making nothing per year, to earning over $3,000,000 while FDR was in office.

More than that, she went on to take great advantage of her position in other forms of graft -- extravagant spending, perks and so on.

While the war effort was on and people were heavily rationed there were commercials stating that a single B-17 bomber sortie would take as the equivalent of 5 car trips across the continent -- Eleanor made a 26,000 mile trip in a specially outfitted transport plane (dressed as a Red Cross field worker) -- all while she was telling others to "conserve for the war", which obviously didn't apply to royalty.

$3M is not a bad take for someone who had no earnings at all before her husband was the President.

The President even partook of his Government power (and it's rewards) directly as well -- though not to the degree his wife or sons did.

FDR had been a stamp collector for his entire life, though he didn't delve into the more extravagant side, and preferred the $10 and less stamps, he was quite familiar with the business side.

FDR became the only president whose home and grave are maintained by the Govt. as a national shrine, and the government was doing this before his death, at his request.

FDR's two sons both became rich men through the use of their fathers office. By today's standards that is blatant corruption, but by standards of the day it probably wasn't quite as bad. However, FDR himself considered it corrupt and immoral when others did similar but lesser infractions. FDR knew of the actions of his sons, and directly supported them in many of them.

Eleanor was blatantly abusing her position as First Lady -- to a greater degree than has ever been done before or since. Most politicians refuse or divert gifts to charity while they are in Office -- go just to avoid the look of impropriety. Eleanor and Franklin had no such moral compunctions. Let us also remember that payola to Eleanor was shared bootie to the President himself.

Worst of all was the actions of FDR for himself. He really did abuse his official powers for his own gains -- and that just reflects on what kind of person he was. While most were relatively minor compared to what he could have received they still resulted in substantial graft. Not only were his actions flawed, but he was blatantly hypocritical about it.

This was the most corrupt and blatant abuse of official power for personal gain by the First Family that has ever happened in this nation -- and this includes Harding, Nixon (Agnew), Clinton and Grant. While others corruption was in their cabinets (except Clinton) -- this graft and corruption was tied to the President and his immediate family and to degrees that boggle the mind to this day.

Absolute Power corrupts absolutely -- and FDR had more power than any other President in history -- and more control over more relative wealth than probably any one person ever will, or should.