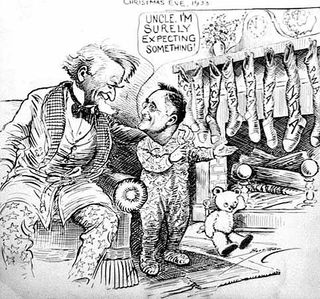 FDR modeled his business recovery on what the Fascists of Europe had been doing.

Most of his programs were later declared flops or were ruled Unconstitutional by the Supreme Court -- but there is no doubt what he tried to do, or where he got the models from. In his usual ironic way, FDR (and New Dealers) tended to use the term "fascist" very derogatorily (when the term became more unpopular) -- and he accused many who didn't follow the New Deal of being a "fascist" (pot meeting the kettle).

To give you an idea of how far his ideals switched from reducing bureaucracy to creating them, one only need to look at a partial list of the new "bureaus" created by his administration:

Well over a hundred new bureau's to help reduce the tax load that was burdening the nation and bankrupting investment.

How many of these Bureaucracies came into existence is almost as bad as that they existed at all. There was fear in the nation over the depression, and the public and congress decided to let FDR try to fix things: we had one of the most cowardly, complacent (democrat controlled) congresses in history. They stopped being the legislative branch of the Government, and became the rubber-stamp one.

Congress passed an unconstitutional carte-blanche law that gave the President (the RFC - Reconstruction Finance Committee, which he appointed and controlled) the authority to borrow whatever money desired. They borrowed over 20 Billion Dollars, and just made new committees, departments, commissions or administrations without congressional approval. The RFC would buy out a corporations stock and then just own them.

Of course congress and the President couldn't oversee all these new agencies, and most of them were created by yanking power (unconstitutionally) away from States and delivering this power to the Fed (and FDR). Thus Congress was violating Article One, Section 1 of the United States Constitution, which says, "Congress cannot delegate its power to anyone else" (called the non-deligation clause). They violated the Constitution both by delegating them to the President and RFC, and again when the RFC created the sub-agencies.

Each of these new departments (and people that used them) were indebted to FDR, and FDR controlled many of them directly (through their purse and because many of their jobs were "appointments"). And FDR abused powers that were far beyond what a King of that era had.

Most of these "agencies" took on second duty as campaign managers for Roosevelt and the New Deal. Government agencies owed their existance (and budgets) to FDR, and they were going to support him and their own interests!

This later had serious ramifications in that many of these agencies turned out to be corrupt, or were infultrated by "Reds" and "Pinks" (communists and socialists) who realized that they didn't have to control the majority if they just held enough key positions. The bigger the government, the more the lure for the corrupt to be attracted to it and abuse it.

This organized infiltration and abuse was covered up by FDR and Truman, and is what lead to the backlash in the McCarthy era. People seldom remember (or are taught) why McCarthy's purges got started in the first place (and out of hand) -- but it was the abuse and failures of the FDR era that lead to the communist infiltration's. Which were supposed to have been purged before and during the war. But instead of doing so, the administration covered up the problem and obstructed justice: and that's what Joe McCarthy exposed, and why he was destroyed. Rampant organized abuse/corruption was ever present around FDR.

It was not a good time for Freedom -- empowering bureaucracy has costs.

High School History texts sell it as there was a, "everyone pitch in" attitude, but that was the sales pitch. In truth, there was much more, "do what we say, or get crushed under the wheels of progress".

We were on a death spiral, fortunately for us, the War pulled us out (and changed the tone), otherwise, we were going to become the USSA.