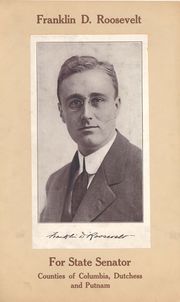 Failing as a lawyer, he went into politics and found his purpose, with the help of his Family Name (and their money).

The Republicans weren't interested in another racist progressive (after Teddy), so FDR switched parties and ran on the Democrat ticket for New York State Senator (1910). Wilson had already gotten the Democrats used to progressive racists, and Roosevelt's willingness to lie (tell people what they wanted to hear), and timing a national trend away from Republicans, handed him a surprise victory. His follow-on election (1912) was close, but he remained in office.

In 1911 FDR was named a Master Mason, and later was responsible for the "Great Seal" being put on the dollar bill. I don't think of masonry as a grand conspiracy, and it was hard to imagine Franklin dedicated to anything but himself, still it was an old boys network he could exploit to his ends. He was appointed Assistant Secretary of the Navy (1913-1920), to get him out of the way, and which suited his sailing tastes. And he used this to build up his Washington contacts. In 1914 he made another play for senator, but he lost the nomination in a resounding defeat. He had crossed the Tammany hall political machine once too often, and they returned the favors. (Politics was a lot dirtier back then, especially in New York).

In 1920 he got the Vice Presidential nomination but went down to a stellar defeat against Warren G. Harding and Calvin Coolidge. This gave him a "cooling off" period, and he dropped out of politics for a bit, was stricken with polio in August 1921. In 1924 he discovered the medicinal waters of Warm Springs in western Georgia -- and created a commercial venture to exploit it's theraputic value for other polio victims. Of course it never became a commercial success, so he converted it to a "charity" to play that angle.

FDR got back into politics by asking Presidential Candidate Alfred Smith if he could deliver his nomination speech, then FDR just stole someone else's speech (which included the "Happy Warrior" phrase that got Roosevelt a lot of credit). Smith needed a strong gubernatorial candidate on the ticket in New York -- and felt FDR decade of cooling meant he was safe (with no "fresh" enemies). FDR agreed to come in, if the party got him out of his Warm Springs debacle, and he got a loan of about $250,000 by John J. Raskob, Chairman of the National Democratic Committee (for Al's campaign), and guarantees of more if necessary. (Basically, he'd over-invested, and due to his perpetual living beyond his stipend spending habits, he needed a cash infusion) And with that, he won the election for Governor of New York (1928), while Smith lost the election to Hoover. FDR held this position for two terms.