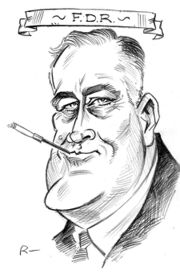 FDR was born in Hyde Park, New York on January 30, 1882. He was a child of wealth and name: American royalty. He grew up out of touch with kids his own age: he was isolated and tutored and tended to by adults (and servants), occasionally following his parents around Europe. After 14 he moved from private tutors to Groton prep school, where his classmates found him priggish and called him the "feather-duster." He was a spoilt child: not very industrious, low education, and not much intellectual interest, who lived in his mothers home until he died in the White House, and he lived off his trust (set up by his father, which his mother administrated). Historians label him a "mama's boy". He didn't get along well with his dad, and an active person in his youth that was into sailing -- later he got into some sports including football, tennis and golf -- until he contracted polio in 1921 (at age 39).

In an era of bookworms, he was anything but. Many that called him "smart", did so "by association" (since he hung out with academics), but he wasn't known for learning or listening particularly well, and most of the academics he hung out with were on the lunatic fringe, and later proven flat out wrong in their theories. By his own admission, he knew very little about Economics or Business (Hoover was far more educated and well read) -- but that didn't stop FDR from criticizing Hoover (then copying and taking credit for his policies). He married his cousin, Anna Eleanor Roosevelt (on 3/17/05), and the marriage was successful enough on the surface --they had five children (a sixth died in infancy). But FDR was not a faithful person and had an affair with Eleanor's private secretary (Lucy Mercer), and was indiscreet and callous about the affair (he kept Lucy's love letters, which was how Eleanor found out). Under threat of disinheritance by his Mom (and threat of divorce by his wife), Roosevelt broke off the relationship. Eleanor was often unhappy over living with FDR's mom, having lots of home duties while Franklin played poker or enjoyed the good life.

Many who knew FDR said he was somewhat a snob in private, but publicly he played "the common man". He was insecure and often took credit for things that others did, then played up "his" accomplishments, bragging about when "he tried a case as a lawyer" (he never had), and there's almost no records of him accomplishing anything as a lawyer, or he talked about his exploits as a teacher (he never was), he told rooms full of veterans about how he had "seen more war than any man in the room", offering detailed horrors he'd seen (yet FDR had never come near a battle in his life). But he manipulated people and the press helped sell his fiction.

He graduated from Harvard, but it was only his money that got him in, and helped him graduate. Then he went on to Columbia to Study Law, but failed to graduate. He was later (as Governor) awarded an Honorary Phi Beta Kappa key (from William Smith-Hobart Ladies College) he wore this on his chain (vest) and misled people that it was from Harvard.

He started as a law clerk, but wasn't very good at it. Later, he was promoted to Partner at Carter, Ledyard and Milburn (1907), but it was because of his family name: Mr. Ledyard circulated a written memo telling others in the firm "under no circumstances put any serious piece of litigation in the hands of Mr. Roosevelt". FDR best acquaintances seemed to consistently distrust him or think him incompetent. Those that knew him in congress often described him as "ruthless". He never forget when people didn't "go along", and would use his power to "get them back".

FDR was not an exceptional speaker, nor "a good manager". Most that worked under him were frustrated and left their positions on unpleasant terms. He changed his mind often, and would give the same roles/responsibilities to two people at the same time (to cause conflict), and try to make them fight for his favor. His Military and Economic Advisors often wrote what a poor administrator he was; ignoring important issues for months, then make snap (and rash) decisions, against the advice of all the people who knew more about a subject than he did.

FDR's behavior didn't lead to a lot of loyalty either -- many that were closest to him at one time (and were in his cabinet or advisors) wrote or said unpleasant things once they left (many had quit in disgust, or resigned in protest). While his Secretary of War (Stimson) publicly praised him, he wrote in his diary, "The President is the poorest administrator I have ever worked under... he is not a good chooser of men and does not know how to use them in coordination". The Democratic party members considered him a publicity-seeker -- but a powerful one that they had to appease. During his early elections, he had catered to the communists/socialists and labor movements (which were very intertwined at the time) and providing the swing votes, then failed to deliver on his promises. Deception and manipulation was his ethos: everyone complained about the agreements he made and broke freely. When we think of the slimy two-faced politician, that caricature is of FDR.