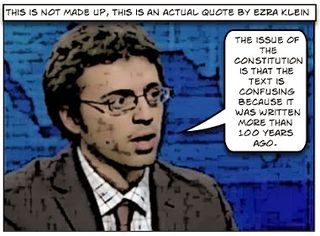 A wannabe journalist, that started his "illustrious" career creating a partisan list of polemic democrats posing as journalists, so they could conspire together to deceive the public on the "news of the day", and coordinate their narratives. When your career starts by violating the basic ethics of your job, there's no where to go but up. Still, he's managed not to rise.

Remember, a journalists job is to present facts (on both sides), and leave it to their readers/viewers to decide. Presenting one side of a story to swing people to your side is either a propagandists or an activists job.

Since being a water carrier for the DNC (activists) wouldn’t vaguely qualify as a journalist anywhere else but the Interwebz and the Washington Post, the Post hired him to continue his wonkblog in print form, where he regularly misinforms his base and attacks anyone with enough basic understanding to correct him.

Democrats put a disingenuous polemic (Khizr Khan, on stage for their Democrat National Convention, to attack the President, and mis-state things and soil his sons image and interests. Trump responded, poorly (overly strong), and Ezra does a heartfelt video that will appeal to partisan democrats, Trump haters, the ignorant, the gullible, all equally. The problem is, what’s the truth?

Ezra claims making these attack videos make him feel strange as a "Journalist”. That’s like saying Michael Moore feels strange as a Historian. I got news, you aren't one. If Ezra disagreed with what Trump did: attack others, then Ezra wouldn't do it. But he not only does what he claims he hates in Trump, but he does it after he ignored when Hillary did worse for less. Hypocrisy much?

I don't know, if someone misrepresented you and lied about you, would you defend yourself? Would you question those that were supporting that attack? This isn't the moral outrage that the left wants to make it into. This was COMPLETELY partisan to put him up there and have him try to swiftboat Trump, or he'd be equally complaining about Hillary claiming the FBI was lying abut her, this same week.

Translation to truth: "When a Democrat and muslim activist, viciously misrepresented and lied about Trump's beliefs, in an attack that was an embarrassment to the Democrats that put this in their convention, and didn't vet the character of the person who did it -- and seems to disagree with everything his son stood for. Unless his Son was fighting for Sharia law, and tribalism that had made his family flee their country in the first place, as the father had".

Reply: Someone needs to get out more. Politicians often defend themselves. Putting a liar on stage and playing on their son's death-sympathy to lie about the other side, is something that hasn't been done before. But the response of attacking the messenger is the norm in politics. Where is his outrage at the media blacking out complaints against Hillary over Benghazi? Those parents were on by the Republicans, but were blacked out by the media -- and they had far more factual and on-target complaints. Hillary didn't have to respond, because the media played the role of her campaign manager. Where's Ezra's journalistic outrage at that?

Reply: Not what I saw. I saw him compliment them, but make some quips and barbs towards Hillary Clinton... then he also pointed out that this guy that's attacking him is being used as a tool of hate, and may have an agenda. Duh. That's not unheard of in politics. When you make yourself an activist, you get responses back. Even if your son died being the opposite of you (a true patriot).

Hillary attacked rape victims for political gain, who were telling the truth... where's Ezra's outrage for unprecedented attacks on innocents there?

Just because your kid dies doing something good, doesn't make the Parents good people, or free from consequences of their actions -- including being attack activists. Sorry. This faux outrage and hypocrisy is more insulting to me, than what Trump said.

Ezra omits key context (as usual), not very journalist-like. (But he doesn't get accused of being a journalist often).

Trump was asked about it and praised their sacrifice first. But when pressed he pointed out that it's interesting she wasn't expressing her views too. That's a valid cultural observation, especially for the party that claims to be for Women's rights and equality. Yes, it's a crass observation -- but no more so than putting those people on stage as props for the DNC. So if you have problem with Trump responding to vicious attacks, maybe you shouldn't put them on your stage in the first place?

If Ezra knew anything about middle eastern culture, he might understand more about how you sort of play up things done wrong to you, and so on. Acting (or living up to your roles) is something that all cultures do. But if this really was about grief from 12 years ago, then it was cruel to make her go on stage and keep reliving it. Thus the responsibility falls on the dems as much as Trump. And the left and media couldn't be playing this up because it distracts from the DNC having the worst and most corrupt candidate they've ever put up, and getting caught rigging their own elections.

What Trump did was counter-attack the tools of abuse the Democrat Party used to slander him. Now the democrats want to claim that was mean to use them as political props -- which is what they did in the first place.