Evolution of the .223 Remington 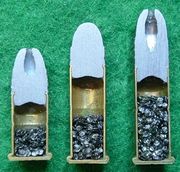 So imagine the evolution of a cartridge.

In 1808 or so, you had percussion caps: when struck they sent out flame, that would ignite your gunpowder and fire the gun (no more match or flint to light your cannon/gun).

In 1857 the first metallic cartridge (the .22 short) was created for the first Smith & Wesson revolver, it was called a "rimfire" because the primer was all around the edge, by pinching the lip (hitting the edge with a little hammer) it would ignite the rest of the powder, and fire the bullet.

By 1871, they wanted something that was faster and longer range and would work better in a rifle, so the .22 LR (Long Rifle) was created, with a slightly heaver bullet and a lot more powder, making it longer. And they kept going with the .22 extra long, the .22 WMR (Winchester Magnum Rimfire), and so on.

However, rimfire was never the most reliable design, it had higher duds (failure to ignite) having to with complexities of spinning the primer and getting it evenly distributed around all the edges, and so on... and since it ignited from one edge, it wasn't as good as if you could ignite the powder from the center. And while patents and prototypes were bandied about starting in the early 1829, it wasn't' until about 1868 that everyone got all the kinks worked out, and people were making Centerfire centerfire ammunition.

By the 1930's, they decided to remake the .22 as a much faster center-fire design and we got the .22 Hornet and .220 Swift and .22-250 Remington, that were highly popular for varmints (meaning coyote and smaller creatures) starting in the 1930's. These were very fast rounds (4,000 fps), and speed makes them easier to hit small targets.

Major rifle rounds for larger game hunting (deer) or the military were always much bigger rounds than these (with a lot more stopping power), usually hunting variants of .30 caliber designs meant to shoot further. (Lighter bullets don't travel as far, and the military thought reach had an advantage). So it wasn't until the late 1950's and early 1960's that the U.S. started looking to make their small arms easier to carry, with lighter rounds.

Well in came the military, and they needed a light fast round, just a little faster, than the .222, but something that would last longer than the fast varmint rounds, so Remington made the .222 special and the .222 magnum -- both just a hotted up .222's with a little more range and speed each -- but not as much as the .220 or .22-250. The .222 special won the military contract over the faster .222 magnum and was renamed the .223 to avoid confusion with the original .222 or the .222 magnum. The .222 magnum quickly faded away as it wasn't different enough from the .223 to justify the difference.

So in summary, Remington modified their .222 and created the .223 -- which was slightly faster than the .30 caliber rounds they had been using, but it was slower and less lethal than other varmint rounds available at the time, and nowhere near as powerful as other hunting weapons. This round is so weak, that it's not even legal to hunt Deer or larger animals with it, in many states.