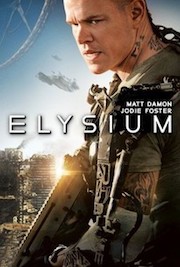 I went and saw Elysium (e.g. Matt Damon does a movie for Obamacare). Honestly, the movie wasn’t THAT bad if you don't think about it too deeply, though I had a few friends that hated it — it got a 58 on Rotten Tomatoes.

It was reasonable action, OK plot, well paced, well filmed and well acted. I liked it better than the Tom Cruise flick. Except for the story... so it was good for 2 hours of entertainment, but annoyed me afterwards. But I'll get into that in a minute.

Anyways back to the movie review.

Other than the plot, it was OK

What didn't I like? It was sort of the sci-fi progressive-socialists version of Animal Farm. Rich people live in space, poor people live on the planet. Which is OK, there's a lot in this genre of exaggerating a caste system to mock our own and cry for socialism. But it didn't bring anything new to the table. It was all about the evil rich and their gated communities and heartless attitudes towards workers -- and that if we just gave everyone things for free, the world would be a better place.... and had overtones of if the rich ruled things how they'd crap on the little guys. And the bad guys are just misunderstood and forced into bad behavior by their rich overlords. [sigh] It was a lot of cliché's in one.

There was a lot of incongruity. It seemed they were implying manufacturing and blue collar jobs were down below, but that means they'd just steal a few of the machines that they were making for the people up above?

I could get into Damon's struggle and the action film part, and it wasn't over-the-top there. But then all the cerebral parts were like, "this isn't good Sci-Fi". Good sci fi often starts from "what are the sociological implications of a set of scientific advancements, and how will that change people".... then you tell a story in that framework. This felt the other way... like Matt and a few buddies got stoned and said, "what if we made a shallow cartoonish exaggeration of the rich getting richer and poor getting poorer”, and oh yeah, we should do it as science fiction because lazers. Thus, it was insulting dogma if you think of it any deeper than a vehicle to sell popcorn and hotdogs at inflated prices -- while injecting your kids with leftist tripe. So it's fine if you want 2 hours of escapism, and don't mind Damon trying to brainwash you (and feeling smug about the brilliance of his clueless message). But I sort of like to keep my religion and entertainment separate.

And that's the problem -- you need some villains/tension to make a story. But if you understand the history of progress you know that the poor today are much better off than the rich were 100 years ago (they're just not as much better off as the rich are today). So the premise of a hyper caste-system is sort of flawed -- the rich will get richer, but so will with the poor, so that's flawed to begin with. Then NPR was on the radio, with Robert Reich parroting all sort of flawed dogma on the drive home, and it pissed me off, and I want to take it out more on the shallow thinkers in Hollywood that make movies like Elysium.

Not to mention that level of technological advancement in 100 years (those are some pretty huge leaps we'd be making). Or that if you can advance that much, why can't you fix other social problems? And so on. So if you can ignore the marxist overtones, it was pretty good. It didn't bug me during the movie, but on the drive home, I felt dirtier for giving Matt my $5 for a matinee. (Not quite Michael Moore dirty, but a little worse than George Clooney dirty)

Other than the incongruities, lack of plot, and sanctimonious smug lessons, it was almost interesting. The visuals weren't bad. Reviewers liked the preachiness, but the 67/58 felt a little generous to me.