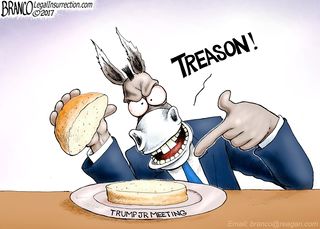 The left has lost their nut over a fake controversy. Donald Trump Jr. took a meeting with a Russian lawyer (Keyser Söze) who implied she had information on one of Hillary Clinton's many crimes in Russia. Being curious if they really did have evidence of those crimes that the media has had no interest in looking into, he took the meeting, as anyone would. Not only was this not a crime, but no info was exchanged -- instead the Russians talked about their quest for a repeal of the Magnitsky Act (a law passed to punish Kremlin associates because of the death of Russian lawyer Sergei Magnitsky). No information was exchanged, there was no crime or attempted crime was committed.

Those Russian lawyers, were working with Fusion GPS... the same firm the DNC and Hillary Clinton’s campaign paid to make up “evidence” of Trump and Russia collusion, and had invented now-disproven stories about a secret server communicating with Russia in Trump Tower, or that gave Democrats’ money to former British spook Steele, who gave the money to alleged or former Russian intelligence agents to create the infamous and discredited Trump-Russia dossier. If there's anything ugly and sinister, it seems like the Democrats behavior was far worse than Don Jr.'s.

So because Trump Jr. took a meeting on Hillary Clinton's collusion, the left is accusing him of collusion (and screaming impeachment, again, like they have Tourette's), even though no information was exchanged, there was no crime or attempted crime, and there's no standard by which the Trump administration should look worse (to the sane and informed) than the Obama/Clinton on this.

The press played this as Don Jr. took a meeting with the Russian government, and that proves collusion. Only:

Even if she was a Russian operative, then the story is blown out of the water, because it was the Obama administration (through Loretta Lynch) that let her into the country under special circumstances (a special waiver, that was extended under special circumstances). And there's deeper ties between her, Fusion GPS (which was responsible for the fake dossier on Trump) and the DNC, and it gets really messy with overtones of collusion, for the Obama Admin and DNC. [1].

If she's a foreign operative, it proves that:

Now she and others have said she was NOT an official operative of the Russian government (which I believe), then it blows the Hillary invented narrative of Russian collusion apart (as a delusion of the left) because:

So the point is the left has so little evidence of collusion, that they have to pretend that this is collusion. While in the meantime, Trump Jr. taking this meeting, kinda proves there's no collusion. If they were having high level and clandestine meetings with high level operatives in the Russian government, then there's no need to take a meeting with a lackey like her, who had nothing. (And they would have known they didn't have to take the meeting with her). So to those that can do 1+1, this hints at a lot more evidence of the Trump's non-collusion, than of any collusion, or they wouldn't have taken this meeting.

But let's pretend it is wrong to do this -- that this is a crime to work with a foreign government to find out dirt on your political opposition. (Even there's no evidence that's what he tried to do, or succeeded at doing).

Fine, then Hillary belongs in prison, because we have actual evidence than the Clinton campaign worked with Ukrainian operatives to dig up dirt on Trump, not to mention her pay-for-play Uranium deal (which is what actual collusion looks like), AND New Zealand PM funneling money into her campaign (foreign influence)[3]. So if it's wrong for Trump Jr. to try to collude, then it's much worse for Hillary to succeed at colluding with Ukraine on the same issue, or Russia on our National Resources or New Zealand. (And it was as criminal for Barack Obama to send over allies to interfere with Israeli elections and undermine our ally Netanyahu[4]).

Worse, the Democrats have colluded with the Russians to go after Republicans on 5 prior occasions[5]. And they knowingly spread disinformation spread by the Russians to undermine the Trump campaign -- so again, if opposition research is a crime, it's time to start locking them up. [6]

So if this is the new standard we're going to retroactively go after Trump for, then we should prioritize on biggest fish first, and Democrats should set an example by crucifying their own. (Of course we know they only think it's a crime when the Republicans try to do, what they've already done).

It's not even the slightest bit immoral

If someone (who happened to be an Iranian or Russian) told you they had evidence that your next door neighbor is a pedophile, and they wanted a meeting to prove it to you, and you took the meeting to see if there was anything there, is that a crime, or even lapse in judgement? I don't think so.

I ask the following of the TDS (Trump Derangement Syndrome) sufferers: if the UK, Russia or Iran had evidence of a Trump crime, and Obama took a meeting with them to discover what it was (before handing it off to the DOJ) is there anything wrong with that?

If Russia could show criminal behavior of BOTH candidates, we're better if we know about it, not that we (American people, or their political opposition) doesn't know because it came from a rotten source. And worst of all is ONLY if Russia knows about it, and the public does not -- because then they have leverage (blackmail material) on an American operative. So you not only have curiosity driving you, but patriotic responsibility to make sure a hostile government does NOT have leverage over any high level American official.

As for the media and left, you can bet 100% that if the NYT, WaPo, CNN and other places bitching about Trump Jr on this, that if they had a chance to follow this chain of evidence against Trump, they would have taken it in a heartbeat. So they're not mad at the action, they're only mad because it was done against a Democrat and not a Republican. (All three places have done worse to Republicans). So they protest too much, and only demonstrate their hypocrisy by complaining as much as they do on this.