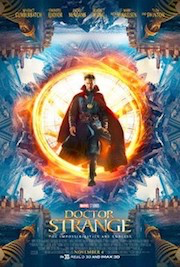 There are good, bad and OK Marvel films: this was one of the good ones. In fact, it would have been the best this year, if not for Deadpool (with it’s dark raunchy style). But they’re completely different films, and don’t feel like the same genre at all. This is almost not a super-hero film at all, feeling more fantastical and spiritual. I liken it to what would you get if you merged the Matrix, Mysticism (eastern), and Marvel (maybe a little bit of inception thrown in). Basically a mind/reality bending martial arts film. And that’s it, it’s sort of a rehash and mishmash of a few stories that you’ve seen before — but it’s so derivative, that it’s unique. While it borrows heavily, that just gives it a familiarity — but it takes you places that you probably weren’t completely expecting. Or at least enough that it’s highly entertaining, assuming you’re not going to pick nits about the rules of “magic”.

Visually, it’s very worthy. The parts I like least was when they rehashed the inception perception games (shifting perspectives), but it was worth 3D, though not necessary. And Benedict Cumberbatch totally holds the film together as the arrogant surgeon who loses his powers to heal, and learns the power of magic through doing all the wrong things. It ends with a level of philosophical nuance, that was intellectually punching way above the weight class. I was not expecting a super-hero movie to give characters that weren’t black and white, or that our actions define us, and other far deeper ideas than just whomp the bad guys. And I wasn’t the only one that noticed the many things to appreciate — Rotten Tomatoes gave it a 91/90 (reviewer/audience) rating. Which is exceptionally high as both something fresh/arty and something entertaining for the audience.

So if you want to see a strange amalgam of super-hero mystic time-space bending magicians, about a doctor with a God complex that’s perfectly willing to violate his hippocratic oath, then this is the movie for you.