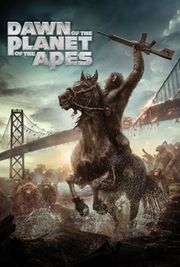 If you want to see Planet of the Apes, this is the best reboot you'll see all year.

Here's was a pretty good review that was a wee bit harsh: http://m.weeklystandard.com/articles/monkey-business_796729.html

Of course you could fit all the depth of the movie into the plot holes, and still have room for all the smug and partisan rhetoric in Hollywood. But come on, if either Romeo or Juliet weren't hormone addled teens lacking in common sense, the play wouldn't have worked either. Sometimes you just have to suspend disbelief and try to enjoy the show.

It was deeper than the Lego Movie, less unbelievable than An Inconvenient Truth. Better filmed than anything by Michael Bay (including Transformers 4: the age of product placement). And the plot was far more followable that X Men: days of future past-present participle. So just ignore that chimps and other monkeys are cannibalistic -- let Mark Bomback, Rick Jaffa and Amanda Silver try to lecture you on the flaws of humanity by viewing it through the sanctimonious lecturing of a pretentious chimp.