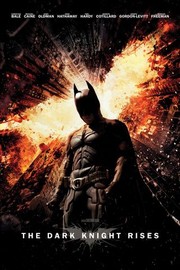 Saw Dark Knight Rises. (some small spoilers). I thought it was good (or slighly better than OK), but a lot less than I hoped for. It got 87/90 on Rotten Tomatoes.

My wife thought it, "stank". (She hated the horse voice, and bouncy bike, and has higher hopes for humanity not reacting like a bunch of sheeple).

I liked that it wrapped up the story arc / trilogy nicely. It had decent effects. But I found it long, and absolutely no surprises that they kind of didn't beat you over the head with foreshadowing in advance. Part of it is that you know much of the story line already -- so it was reasonably well executed on that. But I left feeling it you could have trimmed 30-45 minutes and made it a better movie.

What cracked me up was we're watching the cat-woman make a speech early on, about how "when change comes, we're going take back from all you rich fat-cats living as parasites off the people of this city and not giving your fair share"... and my wife leans over and says, "bet she's an Obama supporter".

That distracted me the rest of the movie. I kept thinking about how I read Rush Limbaugh had made a dumb comment about Bane being a shot at Bain Capital and Romney. Which was WAY way off base. I kept thinking, every one of the speeches by Bane or his supporters in the movie sounded like an Occupy Wall Street crowd, to the point of them actually Occupying Wall Street. If anything, it seemed to show how people use this "social justice" crap as a way to rationalize or cover for their bad behavior -- and how if "they" came to power, they only made things worse. (It could have been written by a Tea Partier) And besides, I assumed Bane came from "bane of my existence" and predates the movie by 30+ years?

So while I didn't feel annoyed that I paid to see it, and it did have a little more depth/maturity that was trying to break through the ponderous pacing... I would have been fine waiting for redbox to carry this one.