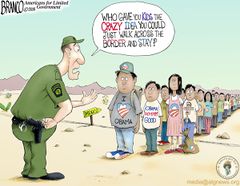 Do you love the Constitution and Rule of Law, or do you prefer a corrupt political tyranny (where the President has the powers to write/nullify law)? Pick one. If you support DACA then you aren't compassionate, you just picked the latter.

DACA is the worst politics 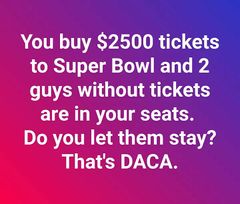 DACA was always about tugging at the heart strings and trying to get the gullible to ignore the chords their brain strings were playing. It's also just cruel and unjust, once you actually think about it.

The premise is the children of squatters, illegally residing in your home, have more legal claim to your property than their parents do. (Or that the kids who commit fraud are not guilty because their parents did it first). Kind of a dicey legal premise to those not thinking with their hearts or colons.

Imagine this, you're the child of a legal temporary visa holder (son or daughter of a diplomat, or person here on an H-1B and so on), and their visa expires, and what happens to the child? They are, "forced to leave the only place they've ever known, and to return to a country whose language they might not even speak". (The rationalization for why breaking the law should be OK with DACA recipients... only it doesn't apply to children of legal temporary immigrants). Why should the children of law abiders be punished, when children of law breakers are rewarded? (or vise versa). It's insane incentives. [1]

There are nearly 5 million people on the waiting list for permanent immigration to the USA. We face no incipient labor shortage from enforcing our immigration laws. For every dreamer who leaves, there are literally five people who've been standing in line, most of them for years for their turn, legally. But instead we're rewarding people for breaking the law, because the left has feelings for law breakers, just not the law abiding.

DACA was Unconstitutional, and that's not moral

Obama knew DACA was illegal, we have him on video, dozens of times saying so. Presidents only get the authority granted to them in the Constitution. And there's no power to write law, or nullify it (except for Veto). Even Diane Feinstein will hem and skirt the question about whether it's legal or not, because she knows it is not legal. [2]

The next rationalization for this unconstitutional grab is the false claim that Obama, "had to act unilaterally", because Congress wouldn't. I've asked this dozens of time, without any proponent of DACA being able to respond, but can you please show me where in the Constitution it says that the President gets to ignore the law if the Congress doesn't do what he wants? What it actually says is, "The powers not delegated to the United States (or President) by the Constitution,... are reserved to the States respectively, or to the people." ~10th Amendment.

The President has broad powers over restricting immigration -- not reversing laws that restrict it. Thus by doing it, he was violating the Constitution. He knew he was doing so, and that's violating his oath of office (which is an impeachable offense). What the history books show that almost every single culture that felt, "the ends justified the means", decayed into evil vile despotism (usually with their progressive fans cheering them all the way into the abyss).

If Obama truly cared about these kids, he would have done what he promised on the campaign trail -- and this would have been the first thing he passed. Instead he waited until right before the end of his first term, to politicize it. Since it wasn't legally passed, that puts all the kids that came forward at risk, as people warned at the time. That's not compassion, that's using them as political pawns.

Some are arguing that "for compassion reasons" it is moral or OK to:

Obama lied and tried to rationalize it by claiming since it was only temporary violation of the law, it didn't count,

Of course all that is untrue. It was never intended to be temporary, look at the screaming when it's discussed being removed. And of course it was amnesty.

Who are the dreamers?

If the Democrats and media are telling you something, it's probably a lie. Their narrative that DACA are all kids that came here at age 6, and have committed no crimes, and are pure as the driven snow, educated (going to college, graduating, etc). They know it's a fraud, or they're not competent at their jobs. The truth about DACA kids is far more mixed, but doesn't fit the narrative as well.

The point isn't all or even most of the DACA kids are bad. It's that many aren't kids, some are certainly bad, and there's no real vetting in the system. It's a back door way around our immigration laws -- and while the Democrats will pretend otherwise, it's insulting to think that people from foreign countries aren't smart enough to exploit it. You're dealing with a community where fake ID's are sold for $20 on the street corner, and you have to commit fraud to stay in the country. And if you're relying on Mexican paperwork, that's completely corrupted. If you believe people administrating DACA, there's huge fraud (upwards of 50% or more). [6]

The point is that they're not all kids that came here as infants or 6 year olds. They can be 31 year old gang bangers that claimed they've been here for 15 years (as long as they never got convicted, under that name). It's also that democrats/media lie for an agenda. You hear about how DACA folks are great, they served in the military. There are a fewer then 900 DACA recipients serving in the military out of a total of around 800,000. That's 0.1%. That's quite a difference. If you haven't heard any of these facts on CNN or in the NYT, that tells you what you need to know about their objectivity and reporting.

So you want to tighten the requirements to be what DACA is claimed as, fine. That'd be a great start for a legally implemented DACA. But anyone who is repeating the media memes about DACA is either a liar or a fool. Large bureaucratic systems just aren't very good at living up to their promises. [7] 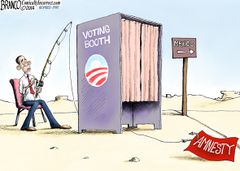 Of course no one wants to see kids punished, for the actions of their parents, except the Democrats.

If the democrats cared about those kids, they would have prioritized passing laws legally (via the legislature) to protect them. But they didn't want to put pen to paper and take responsibility with the voters for doing the right thing. (Because a large swath of their voters don't agree with them).

So instead the President of their party used them as pawns, and just wrote an executive order, late into his second term, which said "the President is advising agencies to illegally ignore the constitution and properly passed laws", as a poison pill for the next guy.

It was win-win... if your goal is to divide the nation and dodge your legal, ethical and constitutional responsibilities. 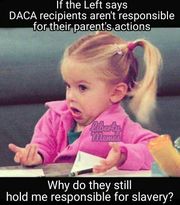 The hypocrisy is palpable, especially by the Democrats who were saying things like:

Trumps floated solution is actually the right one. (Actually, it is to sign an order now, that goes into effect on March 31st 2018).

6 months is plenty of time for the congress to do their jobs. (Even if they will hate being forced to do so).

Either they pass the law the right way, or the unconstitutional fake-law (undermining the rule of law) expires. Either way, Trump gave them plenty of time to do the right thing, and is doing the right thing by ending DACA... and doing it in a way that isn't malicious and harmful to the folks that the Democrats setup as their sacrificial pawns. If Congress failed, it's on Congress.

While the media and press skipped over it, to keep from telling the truth to their base, you need to remember what's going on.

The dreamers are about to become illegals, no matter what Trump does.

Just like DAPA (a DACA expansion Obama tried to push through) was declared unconstitutional and blocked. A lawsuit was currently pending in the Southern District of Texas (and eventually to the Supreme Court). If any federal district judge or Supreme's rules on it, they will have to admit that DACA is illegal, for the same exact reasons that DAPA is: the Executive Branch doesn't get to override legally passed Constitutional laws.

Once that happens, ICE and Trump wouldn't ignore their oath of office (to defend the Constitution and its laws, as Obama did), they'd have to start enforcing, and these kids would be out of here anyways. Trump announced before the September 5th deadlines, to avoid a ruling that would have gotten the kids in worse hot water, and he bought them 6 months time, by promising to revisit. Why don't you ever hear that fact in the media? [8]

The choices are: a harsh reality where either kids that come here illegally, aren't always allowed to stay or an immoral society that says process/laws don't matter when it's politically expedient. Where breaking the law is better than following it. So the choice is do you prefer kids that break the law, or ones that follow it?

If you don't want ALL kids to grow up in a corrupt state, where the actual law doesn't matter as much as the political whims, or the ability of politicians to manipulate the public, then you want DACA eliminated as an executive order, and replaced by a legislative action. If you don't care, then the President is given the power to tell government to ignore any legally passed laws he wants, and then why have a legislative process at all? There's virtually no limits to what the President can tell people to ignore. We're a tinpot dictatorship, even if the supporters have fake cover of process, only when it suits them.

Like they're coordinated, many on the left all claimed it was cruel to try to move from illegal/unconstitutional exec order, to trying to push Congress (Legislature) to do their job and legalize these kids. Sob stories and lies, with no attempts and balance and offering what the costs of DACA are:

The facts they ignore: at least nine states—Alabama, Arkansas, Idaho, Kansas, Louisiana, Nebraska, South Carolina, Texas, and West Virginia—say they'll sue the federal government unless Trump ends the program. They are highly likely to win. So even if the administration wants to continue DACA, it can't. Cruel would have been to do nothing and just let it fail in court, while these kids feared for their future. Instead Trump was pushing Congress into action. And the lying left media doesn't bother to inform their base of those facts.