Collusion is cooperation or conspiracy in order to cheat or deceive others (usually done secret or illegal ways). In modern parlance, it's most often used to work with foreign or anti-American agents, agencies, or nations to undermine elections or American interest. Here I list a few examples. 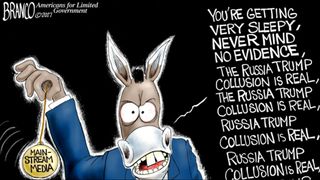 A: Despite 4 investigations, and multiple Democrats claiming things like Collusion/Obstruction, we have no good evidence that anyone can point to. There's virtually no evidence of Russian collusion, and never has been. While CNN watchers won't know better, the people that were often only briefly involved in the Trump campaign (Manafort, Papadopoulos, Flynn), were sometimes snared in the fishing expedition -- but for things unrelated to Russian Collusion, and things they did during the Obama administration (not the colluding with Russia, or obstructing the investigation into it).

The best they have is that after the first Wikileaks details got out, Trump (the bombast) joked that if it was the Russians had done it, maybe they could fine the 30,000 emails that Hillary had illegally deleted. That's not what the Russians went after or was released in the 2nd Wikileaks exposure, and it turned out that the FBI was acting as the enforcement arm of the DNC, breaking the law/policy by exonerating Hillary, and Anthony Wiener's computer had many more than just 30,000 illegal emails on it, some were top secret, and that some deleted weren't just about Yoga or Wedding planning (and they never released): that's a crime.

Lastly, something you never hear on CNN or NYT, is that even if there was collusion, collusion not a crime, or Hillary and Obama would be in prison (not to mention Carter, Kennedy and other Democrats). So this is all a distraction -- and the fact that the media doesn't point that out, kind of proves that they're not interested in informing the public. Q: Is Collusion a crime? - ===Q: Is Collusion a crime?===

A: No. - Remember the basics: even if Russia hacked the DNC, released these emails, paid to support Trump, with the intent of manipulating our election, AND Donald Trump colluded and cheered them on, that still means the Trump Administration did nothing illegal. It might be an unsavory/unethical dirty-trick (like Hillary paying for the fake dossier, leaking it to the Press, and the FBI/Obama administration using it to spy on the Trump campaign), but that's not criminal, and thus is not supposed to be impeachable. There are a few little traps in there like non-disclosure, lying about it, or campaign finance laws... and Congress/Senate can invent excuses to impeach, whether he broke the law or not, but if collusion was a crime, then Jimmy Carter, Bill, Hillary, Barack, Ted Kennedy, and a few others would already be in jail. There no rational standard where Trump is more guilty than the Democrats, and the Press, Democrats and Public have been fine with what the Democrats did. If you haven't heard that in the Press, then that shows how dishonest your sources are.

Whataboutism: the dishonest, ignorant or liars will claim this is "whataboutism" -- a fallacy that tries to rationalize one bad behavior by pointing to another. But that's not what this is. In legal/ethical/justice circles the idea is that justice should be blind, consistent and is based on precedent. If it wasn't a crime for Carter, Clinton or Obama, then it shouldn't magically become one because the guy has an (R) after his name, or because the Democrats and Press really don't like him. Or unless they write a new law (which they haven't done). That's called equal protection under the law and fairness. The Left and Media, don't want fairness and justice, they want double-standards and to criminalize not being Democrat enough.
Facebook Russian-Collusion scandal -

The media is acting like there's some big scandal around Facebook allowing a micro-fraction of their ads, or some fake accounts, impacted the 2016 election. It's all garbage (💩). (1)Scale makes this irrelevant (2) There's no evidence it mattered at all in the election (3) It was done mostly before the primary or after election (4) Most of the ads weren't against Hillary or supported DNC causes. So this is flim-flamming excuses by her troll army, or those unwilling to admit that she was just a bad candidate. 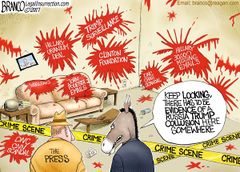 A: We have irrefutable evidence of that:Jimmy Carter asked the Russians to interfere in Reagan's election. Ted Kennedy twice reached out to Russia for the same thing. Bill Clinton did a quid-pro-quo deal with the Russians to help his re-election. Barack Obama in an infamous hot-mic incident was colluding with the Russians. The Hillary campaign paid the Russians for a fake Steele "Pee-Pee" dossier and invented this mess to undermine Trump. That dossier gave the Obama administration and their cronies in the FBI an excuse to get illegal FISA wiretaps on Trump's guy (Carter Page), by perjuring themselves to a Judge -- and that allowed them to listen in on Trump's campaign, then illegally unmask and leak that, all to undermine the elected President! Which helps who? The Russians, since undermining confidence in the election was what the Russians were trying to do all along. Oh, and the DNC, FBI and the media got caught colluding to fix the election and get Hillary in the Whitehouse (and undermine our Bernie Sanders and our Democracy), as proven by the Wikileaks documents and later confessions. That's not even touching the "reset button" fiasco, or giving away our Uranium for payoffs in speaking fees. But nothing at all to show Trump Campaign was doing any election-rigging collusion with the Russians. And again, if "Collusion" was a crime (and not "Foreign Policy"), all of them would have been imprisoned. Trump Rally Attendance - There was a FakeNews scandal where ABC, NBC, MSNBC, CNN, NPR and all the usual far-left sources were gleefully reporting that Trump's rally attendance was low because kids organized a campaign via TikTok to RSVP and take all the tickets. It was FakeNews because it was false. RSVP was unnecessary and it was first-come, first-serve like all the other rally's, so their campaign did nothing to take other people's spots by not showing up. Any place with journalists (fact checkers) would have known that. The reason attendance was lower than some predicted (still higher than anything Joe Biden could muster) was foul weather, news hype about COVID likely scared off some, expected violence from the mainstream left (BLM, and other Democrat activsts). There were agitators harassing people at the gates and preventing attendance. But the media misreported all of that, and was celebrating cheating, lying and bullying as a way of disrupting their political opponents -- showing that they're not journalists, but left wing propagandists. 2016- Russia Trump-Collusion FakeNews Fiasco - 🔥 CNN, NYT, WaPo, MSNBC and all the left leaning media has been promoting this FakeNews Fraud that there was Trump-Russia Collusion, that collusion is a crime (it isn't or Carter, Kennedy, Bill and Hillary Clinton and Obama would all be in prison).