We watched the Space Shuttle Challenger disaster on live feed at Rockwell that morning. When it blew up, there was a bit of stunned silence. After a while, I walked back to my desk, and thought about the lives lost, and the politically correct environment, and what it would mean. Then I used a big red cancelled stamp I had acquired, and stamped it in red across a poster that was on my cubical wall: turns out, that was not a politically correct move. 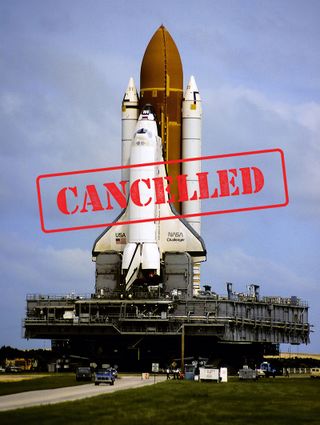 Rockwell was a major contractor for the Space Shuttle. So they took NASA and the shuttle pretty seriously. I was near the front door, and had a large "laser poster" (photo) of the Challenger taking off as my cube-decoration; which anyone coming into my area of the building saw. It was a little political sucking up, and a lot of personal interest. Needless to say that every launch was taken quite seriously. We got feeds from Cape Canaveral and the like, and used to watch the Shuttle launches and landings.

The landings came down pretty close at Edwards Air-Force base, and more than a few times, people went out there to watch them. I found it boring; sit, and wait, and wait and wait and wait. Then a fly spec drops out of sky, makes a big noise, and then comes in really fast, and lands quite a ways away, which you can barely see at that distance. Then hours go by, and you leave. Not my idea of a good time; but each is a little piece of history.

One day, we were watching the shuttle launch, and it goes off. Boom. I was in a room with about 30 people, and it got very quiet; and people were asking what happened. It was interesting that engineers could not compute what happened, and watching them processes the event and try to come to grips with it. The same thing happened recently; I work at a newspaper, and was watching the reports of one of the twin-towers getting hit by a plane, when we saw the other go in live; and later the collapse. Seasoned reporters just couldn't process events. What happened? It fell down. The brains of some just sort of go on overload and can't process.

Back when the shuttle blew up, I just got to be my sometimes-cynical self, went back to my cube, and grabbed a huge "Cancelled" stamp, and put a big red "cancelled" across my poster of the shuttle. It was my way of coping, and knowing what was going to come; investigations, debate, finger-pointing, delays, and years before anything happened. As well as the specifics that this shuttle had just been cancelled by some minor engineering flaw or human error. Or as either Michael Collins or Alan Shepard has been quoted with saying some variant of, about their Apollo Experiences; There you are, sitting on top of 6 million moving parts, and on top of the most powerful machine ever made, on top of 100's of thousands of pounds of explosives, and all you can think of is that every single part was made by the lowest bidder. Kind of puts your humanity, and all our humanity in perspective.

When I mentioned the Air Force often has a limited sense of humor? This was one of those times.

They were visiting that day, and I got reamed for my poster being in poor taste. The same poster they all loved just days before; one word, one event, and our whole perspective changes. Oh fickle humanity.

Hey, I was just coping with the event in my way; and I hadn't broken any rules. Yes, people died - but people are also likely to over react. Space exploration is a dangerous business; and it was more commentary on people's inability to understand scale and risk, than it was mocking those who had perished. I also pointed out to the boss that if they moved me to a back corner, then this wouldn't be a problem now or in the future; I'd been tired of being in a high-traffic area anyways, which I'd mentioned before. They decided that was a reasonable solution. So for being unintentionally callous, I got a bigger cube away from the major traffic flow, and I learned that you can turn any negative into a positive if you try hard enough. 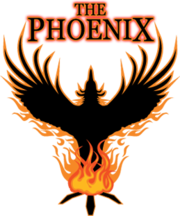 They also started some discussions (some corporate contest) to think of a name for the replacement shuttle. I was a shoe-in.

I mentioned that I had the perfect name, "The Phoenix"

There are a few variants; but the basic story is about the bird being reborn by rising from the ashes and conflagration that devours it (each 500 years), and gives hope and rebirth to a new era.

It was perfect; it went with the whole space-plane, military theme, rebirth, and brought in the flaming crash, and the rebirth.

The message being that we won't let tragedy or flames hold us down.... Well, at least I thought it was perfect.

Remember when I said the Air force has a limited sense of humor; it extends to poignant irony as well.

I felt the name Phoenix sent the right message; we will not be deterred, humans can rise up, and so on. They felt it was politically incorrect and all too inappropriate to even consider. (More the "you're a tacky bastard to even think of that" attitude). Such is life. Instead we got the far more lame name "the Endeavour". I still prefer my name. Oh well, my money, their bureaucracy; and they get to pick the names.

Sometimes our events and experiences define us. I can remember watching man land on the moon (barely), Nixon getting impeached, Reagan getting shot, Clinton not getting shot (Lewinsky). Challenger, Beruit, 9/11, Columbia and so on. What we see and feel makes us who we are. We are victims of our times, and our ages and perspectives when these things happen. Sometimes how people react to it, or what they learn from it, is more important than the events themselves.