I hate hypocrisy and duplicity. My mom's family was Italian, and they always had a loose relationship with the whole truth. It was more a fluid concept for them, where the truth was the best story you could sell -- or that if you repeated an embellishment long and hard enough, then success (acceptance) was proof of validity. From as long as I can remember, I recognized it and didn't like it. Not one bit. For me, the economics of a lie applied: in order for a lie to be valuable, it had to be trusted, or for that to happen, it had to be used as infrequently as possible. It helped form me into being a more honest person (with myself and others), and my self-righteous crusade against those who would fictionalize the past or present. Chuck Schumer is the antithesis of that, and everything I believe in.

All Politicians flip-fop and occasionally shift positions. I'm get that: People grow and thus their views must shift a little and Political winds change, so in order to represent your constituencies you have to adapt a little. Republicans and Democrats get caught in this, and I find it over-sensational to cry wolf on these adaptations. But with Chuck Schumer (and a few other Democrats), it's nothing like that, it's 180° pivots, almost immediately and in the most caustic, abrasive and insulting ways. 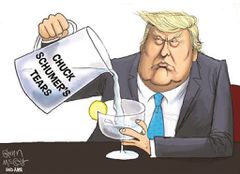 Look at the following positions from the King of Clowns -- and I don't have to point to obscure articles, we have it on tape[1]