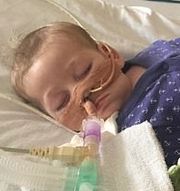 In 2017 the leftist Press put a near blackout on the topic, because it didn't fit their political agenda, but Charlie Gard was a victim of Single-Payer "Healthcare" and an example of a "death panel": (1) A terminally ill infant presented with a rare disease (2) A couple of children with the same disease (caught in early progression) had been treated in the U.S. (3) The parents wanted to take their kid to the U.S. and try to save their child's life. (4) The UK's infamously bad NHS system did not want to spend the money -- so a death panel denied their claim. (5) The Parents raised the money for the treatment themselves and appealed. (6) The death panel decided to put the kid in a hospice and take away his ventilator until he died. (7) Cost savings achieved... but don't call it a death panel.

From an economics position, it was in the best interests of the state to not expend resources on a child that was likely to die or have a low quality of life anyways. But is that the state's decision, and why not the parents? The ethical dilemma is who decides?

And that sums up Nationalized (Politicized) Healthcare in a nutshell. The politicians decide who gets what treatment (a death panel). Health services delayed is the same as health services denied -- and the NHS proved the road that ACA would lead America down, one where bureaucrats and lawyers argued over your end of life decisions, instead of leaving them up to individuals and doctors. So while this wasn't in the American system, it was a big foreteller of what the left wanted for America, and there was definitely a death panel in that case.

When Sarah Palin started using that term (Death Panel) towards Obamacare, the leftist Press (and their fake-fact-checkers) lost their nut, and screamed she was a liar... it wasn't a "death panel", it was just a panel that could make life and death decisions over what treatments you were entitled to have. Charle Gard was a living (dying) example of what that means: he died due to delays caused by single payer (not unintentionally).

This points at a wider problem (dilemma) with government, and what system do you ant to live under: Malevolent liberty or benevolent tyranny?