From iGeek
(Redirected from Category:Fox News)
Jump to: navigation, search 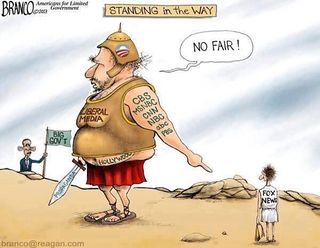 The left loves to hate. And there's little they hate more than Fox News. Why? If you ask them it's because it's biased, sloppy, and sensationalizes headlines. All true, but MSNBC, CNN, ABC, CBS, NBC are all at least as bad in all those areas, so we know they lie (either to themselves or us) about the reason. And the real reason they hate it, is why it is so needed. While they are sometimes biased, they counter-balance virtually all the other stations which slant from hard to harder left. By itself, Fox News would mostly give you the right-slanted view of things. But there's no way a right wing person can ignore all the other left wing stations: so they get a balance from Fox News. While a left wing person can avoid Fox News, and get only the far left view of things (with caricatures mis-represented in those same sources). So with Fox News, the world is more balanced. Without it, it is more imbalanced. And since the truth is often towards the middle, Fox New's scarcity of opinion, is the exact diversity of though that is needed to get a deeper understanding of every issue.

Summary: perfect, unbiased, pure News is a myth. We've never had it. So the question to me how do you measure Newsworthiness? I use uniqueness/diversity (Scarcity), quantitative or qualitative measures.

Uniqueness is about is this valuable info, and can you get that info anywhere else. The following sources are interchangeable: ABC, CBS, NBC, Media Matters, AP, Reuters, Think Progress, HuffPo, MSNBC, DNC, CNN and NYT, WaPo and about 90% of the Newspapers, Blogs and so on. (Though Newspapers generally have more space to dive deeper). Which means you have have 49 variants of vanilla (either the left, or the far left points of view: which is part of the story, but not all of it). There's little diversity of thought or perspective on looking at problems, and less on approaching a solution to a problem. If your only tool is a hammer, every problem looks like a nail, and almost every story from those sources is looked at as an excuse for more government.

NOTE: There have been MANY scholarly studies or imperical examples of this bias. Denying the bias to me is just a statement that someone is so far from the center that they can't even see the center in the distance. If anyone has doubts is they can read many articles on Media Bias.

To understand an issue, you need both side's views. And once we accept the reality that the majority of the media skews left, the non-left's view is automatically far more valuable. The left view is common, the right, libertarian or pro-individual view is rare. If you want news that isn't going to see big government as the solution to every problem, you kind of have to watch Fox News, Forbes, WSJ, and some websites and talk radio. Thus the economic concept of scarcity increases value, means that Fox's uniqueness in representing between 40-60^% of the population makes them more valuably than any 3 or 4 of the other sources, and this is reflected in the ratings.

That's not to say you should ONLY listen to Fox (gawd no). But Fox News + any other News Source gives you a more diverse view than watching 6 of the other channels.

Quantitatitely is about how much of their programming is News versus Opinion. Fox and CNN are about equal (50/50 news vs opinion), and CNN has a superior ratio to about any other liberal source of News[1]. Even the NYT admits that 80% of their front page material is opinion[2], and when you look into the New York Times historical and current bias, they make Fox News look like neutral arbiters. So I find the argument of quantity is often a pot vs kettle situation from the left. They're OK with MSNBC or HuffPo having MORE opinion pieces than News on them, but Fox isn't real news for having less opinion on it than their side. Which really means they don't like the right skew, not the quantitative ratio.

Qualitatively gets more tricky. Because are you measuring the quality of the opinion or the News?

I've found that 99% of the attacks on Fox News are comparing Fox News opinion against other sources Hard News.

So these gotchas aren't exactly an objective measure. But if you're a casual News watcher, and you're seeing a lot of the reports about errors on Fox, and the mainstream media not holding their own opinion shows to the same standards, it's easy to be mislead.

If you compare opinion to opinion, Fox has to have higher quality because they have more liberal sources against them. So assuming no moral superiority, they just have to be better, because they'll be gang raped by the others when they aren't. Whereas the others know that the other DNC-run media won't hold them to task, and they can wave off Fox News as crazies. So the lack of standards on the left, results in the left having lower standards. I've never seen a measure that Fox News is really any worse, and quite a few that hint while their mistakes are reported more, there are fewer and they're more likely to admit and correct them. So opinion to opinion favors Fox.

If you compare News to News it is also in Fox's favor. I find that CNN or BBC is slightly better on subtle foreign policy points. But on War, Economics, domestic policy, or questioning the administration, Fox offers News, and the others trend towards the democrat talking points. (Again, that varies by topic, of course). Remember, CNN and others have gotten caught favoring dictators and soft-selling stories because they didn't want their stations kicked out of the countries. While Fox's more ad-hoc, consultants, and teaming up with local sources, gives them more flexibility to be honest.

That being said, both sides infuriate me with lies of omission. (Not putting and then refuting the other sides best points -- but just glossing over them or not giving the facts that refute their sides points: leaving the audience more secure in a simplistic answer, but with less understanding about why the other side disagrees).

Some examples: I often channel surf during big news events to see what they're saying. Early on, when Richard Reid (the shoe bomber) was trying to light explosives in his shoe on fire. CNN was reporting, "he was trying to light C-4 in his shoe on fire". Which is embarrassing, since anyone with a clue knows that C-4 just burns smokey and doesn't explode under fire ignition (it takes electric or concussion to make it boom). I flipped to Fox and they had a military analyst explaining, "he was trying to light a plastic-type explosive on fire. But since C-4 doesn't explode under ignition, this implies that it was doped with something as an igniter agent. He was also sitting in high impact a row that would maximize damage, which implies way more than a solo effort to know how to do this. It appears he had the backing of a terrorist network".

Fox turned out to be correct and miles ahead of CNN on qualitative reporting on that topic. And a few dozen other back and forths on events convinced me of the same. Fox New's hard news reporting, especially their War/Conflict correspondents are far better. (Better experts).

Remember CNN got caught suppressing negative news about Saddam or other regimes because if they didn't, they would have lost their station there. Fox News using more consultants and teaming up more with just local folks, and more ad-hoc reporting, frees them from having to cow-tow to tin-hat dictators as much.

Fox News was pretty good at the start. In the mid-90's, Murdoch & Co. figured it out. If all the others skew left, that means there's a huge audience untapped in the middle and right. So they started by offering a centrist to soft right skew.

Fox News also figured out the drama game early on. With the exception of one or two shows, you could look on any left leaning source (all of them) and find the format for a talk show was a left leaning moderator, 2 left leaning opinion folks, one clueless centrist, and one right leaning person (sometimes just a RINO / Fake-Right, and sometimes a real conservative with chops). But it didn't matter, the conservative was virtually always outnumbered. And the host would time breaks or change topics whenever they started scoring too many points.

But that wasn't very interesting unless you were a far lefty that wanted to avoid any enlightenment and understanding of the other side (beyond the superficial pleasures of watching their ideas get gang raped). Fox News figured out the more even the match, the more interesting the fight. And so they started doing a much better job of evenly matching folks to create that drama.

Sadly, that lasted until the early 2000's or so. When you get in a battle of ideas and information, the left almost always loses. That is why they go for emotions, ad hominems and changing the topic so much. So even though they were fairly evenly matched in pedigree or background, the left was still usually out-classed. (Like Hannity and Colmes: where Colmes looked like the "libtard" that he was -- and eventually he left). Other liberals were attacked for going on Fox News, because their ideas couldn't hold their own, so they got beaten up. The left wanted them to stop going toe-to-toe, because they got their asses kicked, virtually always. And throw on top that the right isn't any less immune to wanting to just hear their own side (it's just harder for them to do so). But by the mid 2000's, Fox News started using the left's trick of stacking panels, and only being able to get liberal lightweights (or masochists). And instead of being better, Fox News just became the same (except leaning the other way).

None doesn't mean Fox is close to flawless, just often as good or better than those criticizing them. Wise people are skeptical of all the news, and partisan people are only skeptical of Fox News. But Fox adds unique value. If you want to be informed of both sides, you need to watch both sides opinions, otherwise you're only getting half the story. Of course the left wants to kill or minimize the only source for 40-60% of the population's views, and collapse our information infrastructure, into a single party system. But all wise and skeptical people would serve their own breadth of knowledge to watch both sides before making up their minds.