From iGeek
(Redirected from Category:FakeNewsmen)
Jump to: navigation, search

They say "you are what you do", you're the sum of your work, and your work is a reflection of your soul. While some of Sorkin's stuff is mildly entertaining, I'd be embarrassed if I was him. Of course he probably isn't, which tells me what I need to know about him. Brian Williams - Not a very sharp an American "journalist" at NBC News and MSNBC anchor, who's far left and not very bright. Chris Matthews - Chris Matthews, he's ignorant, dishonest, and holds 34 honorary degrees, and one real one (liberal arts). A female assistant producer on his CNBC show (circa 1999) accused him of sexual harassment, and Matthews was reprimanded and she was awarded a $40,000 settlement. Since few have been as partisan, made as many mistakes or gaffs, and he was a sexual harasser, he's of course been the recipient of many leftist accolades in journalism. Dan Rather - Dan has it all, a career of sloppy rumormongering, fired from CBS for failing to vet forged documents (in order to undermine an election), suing CBS and losing, and still defending his actions to this day. He started his career reporting JFK's death before he could have it verified, taking the Vietcong's side in the Vietnam war, dressing up as a mujahideen fighter during Afghanistan war, his career is a parody of Ron Burgundy. If Ron Burgundy was less self-aware, and hated America. Eason Jordan - CNN Director Eason Jordon was forced to resign after falsely claiming the U.S. (and Iraq) were intentionally targeting innocents and journalists in Iraq. Fake Newsmen on Guns -

If it was one or two Newsmen that had an opinion that occasionally slipped out, you could understand. People are allowed diversity of opinions, and Newsmen aren't perfectly unbiased. But when majority of them inject their Gun Control opinions into everything, and dwell on it (knowing that sensationalizing mass shootings gets more shootings), that all their bend and errors goes one way (against Guns, 2A or NRA), they make never correct errors of guests that are anti-gun, often argue with guests that are pro-Gun and know more, and it starts to paint a picture. It's not just outliers, there's no diversity of opinion, being ignorant about guns and have strong opinions against them, and propagandizing against guns, is virtually a requirement of the industry. Gersh Kuntzman -

(D) NYDailyNews writer. The appropriately named Kuntzman fired a weapon and had a literary meltdown about how scary it was, and exaggerates (to comical levels) everything to do with the gun and his experience. His serious piece in the far-left NYDailyNews reads like satire (to the informed) and shows everything wrong with gun controllers and scare-mongers. The AR-15 is one of the lightest hunting rifles and has a recoil spring to make it even easier for 9 year old girls to fire (or guys fire it off their nose and testicles). To him it was a canon or bazooka that bruised his shoulder and threw sulfurous shells whizzing past his face. Then he got wrong rate of fire, that it was a military weapon, or that you can get PTSD from firing a gun at a range. The first syllable of Gersh's last name certainly fits him to a T. He single handedly proved to the gun-aware what lying douchebags leftist writers are. Jim Acosta - Jim Acosta is to "journalism" what Hitler was to comedy: the grandstanding douchebag making himself into the story through obscene antics, and being wrong in virtually everything he does. When the President said "next" and tried to move on. Acosta decided to "lay hands" on a WhiteHouse intern, and physically prevent her from doing her job - which is handing the microphone to the next person. For that he got his White House credentials suspended, and the left proved their insanity by whining that this was an intrusions on the first amendment or a Free Press. Words mean things, and they don't mean what the left seems to think they do. Jimmy Kimmel -

Jimmy Kimmel was a misogynist and not-very-funny pseudo-commedian of the Man Show, before he became a host of late night TV. Then he decided to become "woke". Instead of taking the Johnny Carson tradition of poking at both sides, but mostly staying out of politics except for some zingers -- Kimmel became an SJW moron, that alienates anyone with a triply digit IQ. Instead of replacing Johnny Carson he decided he wanted to replace Jon Stewart, because Stewart had lower ratings, lower IQ audience, and won all sorts of Hollywood awards for his dishonesty. Who wouldn't want some of that? John Oliver -

John Oliver is Jon Stewards perpetually outraged successor, but it feels like he's Jon's British Socialist cousin -- which isn't a big stretch as sympathy for statism seems to run deep in that family. It's their schtick: look at everything in the world as if you're channelling Mao or Michael Moore, if either had an occasionally amusing sense of humor. They're funny, if you don't think too deeply of their policies and consequences. But if you do, they're just Patch Adams telling crippled jokes to amputees at Walter Reed hospital. Katy Tur -

(D) NBC/MSNBC correspondent/anchor - she became famous by dating far-lefty Keith Olbermann, and not knowing basics of Republican positions, and what semiautomatic or Glock means before talking about guns. She doesn't know the difference between automatic and semi-automatic, and thinks "Glock" defines a rate of fire, instead of a brand. The problem is since the questions are usually scripted, it implies no one on the staff knew either. So I'd say to her, "Honey, next time, do your research before you do your segments, like a big-girl journalist". Lawrence O'Donnel -

He started his careers as a Pat Moynihan's page. A classic DC joke was, "Why don't congressmen use bookmarks? Because they like their pages bent-over!" and that explains Lawrence O'Donnel's reflex for bending over at the site of any Democrat who came on his show, and being a nasty human towards those he doesn't agree with (politically or otherwise). He's an admitted, "European Socialist" and "I lie to the extreme left," (his words), so he deserves credit for being open about his anti-liberty and anti-American bias. And he's actually got a quick wit (and quicker temper), but he only uses his powers for evil. He wrote/co-wrote/helped produce dozens of episodes for Aaron Sorkin's show, The West Wing, which won an Emmy award. And has a history of being a contentious host... for conservatives. But he saves his best idiocy for his views on Gun Control, like not knowing that pistols and rifles have the same rate of fire, or claiming that because an AR-15's bullets are faster, that you can't kill them with a pistol's slower bullets? Nate Silver - 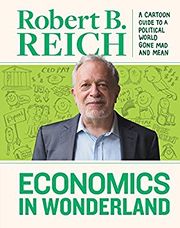 Robert Reich the 3rd (or the 3rd Reich), seems to be a German with Napoleon Syndrome, and pick the wrong side of every issue. The charm of Rosie O'Donnell, the wit of Nancy Pelosi, and the balance of Michael Moore, if I want a moral compass, I use him for his knack to always point due south. This article details a small fraction of his stupidity and dishonesty. Samantha Bee -

Samantha Bee is a non-funny Comedian, nasty partisan polemic, with lousy ratings. She also used sexist and derogatory speech that would have gotten any conservative fired (and did scare away some of her advertisers): but hyper-partisans on her network have protected her from the consequences of her incompetence, in ways they never would have if they had a competent and conservative talent.

Stephen Colbert has a quote that goes, "Isn't an agnostic just an atheist without balls?". I'd retort that isn't a polemic pundit hiding behind the label of "comedian", just a bigot without balls? It's kinda like Josef Mengele claiming he was just an anthropologist. Colbert is famous for parlaying a mocking character on The Daily Show, into a low rating show called the Colbert Report, where he was a sock puppet for the DNC, and pretends to be a conservative commentator by mocking all their positions in straw man form (e.g. reducing all their points to an extreme that he could more easily handle than the truth). With low ratings, hyper-partisan bias, and an embarassingly uninformed audience, he was the perfect choice for taking over The Late Show from another un-funny DNC sock-puppet (who had sex with most of his female staff), David Letterman. Colbert has exceeded Letterman by being every bit as unfunny, nasty, and small minded as his predecessor.

Once considered the paragon of a fair Journalist, now a parody of journalism, often reminding people of how partisan and biased he was all along. Whoopi Goldberg -

Don't get me started on these klatch of dim-wits on The View, with Whoopi Goldberg (D) ex-comedian and TV Host always reminding us of her High School drop out's wit and wisdom. They're a good example of people in NY and Hollywood talking about shit they don't know the first thing about. Things like Whoopi saying "She wants Automatic Weapons banned"... good for you, only fully-automatic weapons have been banned since 1934. And if you don't know the difference between fully-automatic and semi-automatic guns, then you shouldn't talk about either. Just avoid guns in general, since you'll just demonstrate a strong opinion based on complete ignorance of the topic. What's worse, she's an NRA Member, Gun Owner, and someone that should have a clue. I used to be a fan when she played a fake Nun instead of now playing a fake TV host -- the more she talks, the less there is to like.

And so many more: