From iGeek
(Redirected from Category:FDR)
Jump to: navigation, search

FDR (Franklin Delano Roosevelt) is almost universally lauded in our Liberal History Books as one of the great Presidents of the Century: man of the People, saved the country from the great depression, progressive policies, idealism and integrity, guided us through WWII, saved not the nation and entire world from tyranny, and so on.

There's a few half-truths buried in the caricature and clichés, but there's an awful lot of lies of omission and commission. I'm going to focus on the darker side of FDR, not because that's all there was to this complex man, but because we should know the bad and the good to judge for ourselves, not just be force-fed the propaganda version.

He focused power so that he could abuse it, corrupt, vindictive, liar (betrayed most that trusted him). He ignored the Constitution and his oath of office, many of the countries worst shames happened under his watch (and by his hand/guidance). According to those closest to him, he was a lousy diplomat, a poor administrator, not scholarly, nor thoughtful, well read or even bright. He was people smart (manipulator) that enjoyed playing people/groups off of each other. Other than that, he was likable, mercurial, and aloof.

FDR grew up a rich, spoiled, child of wealth with a name: American Royalty. Out touch with other kids (a snob in public and private), tutored (but low education and not much intellectual interest), readily willing to exaggerate his accomplishments or tell stories that never happened. He lived off his trust and in his mothers home until the WhiteHouse. He graduated from Harvard and Columbia, but based on his name and wealth and certainly not his academics. He became a law clerk where many of his "friends" and acquaintances felt he was ruthless, untrustworthy and vindictive, and he was unfaithful in his marriage to Eleanor... his detractors had even worse things to say. But his name, power, and ability and willingness to manipulate people, gave him a prestige that few would deny. When we think of the slimy two-faced politician, that caricature is of FDR. But like him, or hate him, he was a force that couldn't easily be ignored.

Failed lawyer, successful politician. Progressive Racists weren't welcome in the Republicans (after Teddy). So he switched parties to the Democrats (who were used to progressive racists after Wilson). Then he ran for Senator of NY (then and now, that seems to be popular for the power hungry). Plus, and the timing was trending away from Republicans, so he was a surprise victor.

FDR was a Mason, loved backroom dealings and old-boy networks, and later put the "Great Seal" on the dollar bill as homage to that influence and cronyism. After plagiarizing someone else's speech, he got the NY Governors seat in trade for a sweetheart loan to bail him out of a failed "Spa" (Warm Springs Debacle): because his spending habits exceeded his generous stipend, and he had no fiduciary competence, he was often in debt.

He contributed to the Depressions causes by not regulating the banks, then blamed others when they collapsed. He became President by attacking Hoover's policies, then stole all of Hoovers ideas (only worse). And he completely flipped on all his campaign promises like he was going to cut deficits/spending, wasn't going to take us off the Gold Standard, he was going to be the era of smaller government, and not be corrupt. Then he did the opposite of all those things, abusing the trust of the public, powers of the office, and made the depression much worse and longer.

It was not a good time for Freedom -- empowering bureaucracy has costs. High School History texts sell it as there was a, "everyone pitch in" attitude, but that was the sales pitch. In truth, there was much more, "do what we say, or get crushed under the wheels of progress". We were on a death spiral, fortunately for us, the War pulled us out (and changed the tone), otherwise, we were going to be the USSA.

The Republicans tried to get elected in 1936 on the same platform that Roosevelt had used in 1932 -- "Cut Deficits, Reduce Spending, Eliminate Bureaucracy". The Democrats were livid, and accused them publicly of stealing their platform.

The Republicans responded publicly with, "Why not, the Platform has never been used?"

But FDR had gotten enough people suckling on the Govt. teat that everyone wanted more, and was afraid to let the free market save them: things had to get worse before they got better. And his policies made things much worse. (His second depression was worse than the first one). The culture was polarized, contempt for the law was at an all time high, FDR was trying to stack the Supreme Court and created a constitutional crisis... when along came WWII and saved FDR's ass. He could lie to the American people about not wanting to get us into a war, while doing everything he could to get us in it. And external villains are great distractions. (Read George Orwell's 1984, and remember what he'd seen and inspired his warnings). 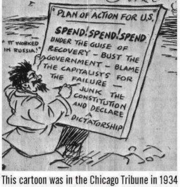 FDR should have never been elected to a 3rd Term. Both the tradition of no other President being arrogant enough to think they were worthy of serving that long, and no public being gullible enough to re-elect him. (But this was still part of the progressive era, and mass immigration had lowered the standards that far).

While lies (and a conspiracy to deceive the public) about FDR's health and history had perpetuated over his entire time in office, by the 3rd term it was to the point of absurdity. Had the public known the depth or breadth of his malady's, he would have never been elected to a 3rd term.

But then again, him not being being able to participate more, is probably what allowed us to win the war. And slowly, some of our freedom's back. It is not a surprise that he died in office -- dictators don't give up power easily.

Hoover gave a speech in 1940 (as payback?), which was the most eloquent description of what lead rise to the dictators of Europe and the USSR -- and it was just as clear a warning about the path we were following.

In hind-sight, we haven't had a complete colapse like Europe did -- but we have been teetering on the precipice a few times. Certainly we were lucky that the war came along (and FDRs death), which saved us from continued entropy of freedom. But what you don't see in Hoover's speech is the bumbling, insensitive boob that some of History books sell to the gullible.

FDR scammed his way into a 3rd term by pretending he didn't want to run, and was forced to by a faux "people's decree" that he had machinated behind the scenes. (Union bosses, and other paid plants on the convention floor, demanded it on his command). He also ran on "Neutrality" while we know his intent was the opposite: he was provoking both the Japanese and Germans to give him the excuse to go to war with Eurasia.

His racism showed through when he interned the Japanese-Americans, and turned away boats of Jewish refugee children, with knowledge of the holocaust (and what was going to happen when they returned). He gave Stalin permission to commit War crimes against the Germans. And basically many things he got involved in, in the war, went poorly. Fortunately, he wasn't involved much, and Winston Churchill had lots of experience suffering fools in labor party, so he generally put up with it, because he needed the Americans despite their foolish leader.

Graft is taking profit from one's political office (or taking money for their influence). The politicians of today have nothing on FDR, not even the Clinton's. As Governor FDR stated on many occasions that Public Officials should not be living beyond their means (or getting economic gain from their political influence). FDR specifically said '''that financial gains should apply to members of a politician family as well as the politician himself.' FDR dismissed one Sheriff (Farley) saying, "What of a public official who allows a member of his family to obtain favors or benefits through his political connections?"

Like all things FDR, if he said one thing, he was doing the opposite: FDR was publicly against graft, and one of the largest recipients of it in history -- both directly and through his immediate family. His Son's (James and Elliot) both became rich men through FDR's influence peddling. His wife made millions from foreign gifts, ads, and other forms of payola. And FDR stole rare stamps from the post office, had the government pay for home improvements, and deeded his property to the government so that they would pay the taxes for him. Dirty by his day's standards, criminal by today's.

Many years ago, I was discussing WWII history (which I've always had an interest in) with Historian friends -- and they came up with some claims that were so foul that I just couldn't believe them. I scoffed and was supplied with overwhelming evidence to support their claims, and I was so disgusted by what our nation (and our President) had done, that I ignored facts and just denied that it could have happened. I became an unreasoning person -- and it took me years to open my mind to the possibilities that are the facts.

What was so detestable that I couldn't accept? Roosevelt and the State Department knew about the Holocaust from it's inception and not only did nothing about it, but intentionally hid information about it, and prevented more Jews from escaping. FDR played politics the whole time, and only did what was in his best interests, knowing what the results would be to many innocents. FDR only acted in the best interests of humanity when forced by public pressure and exposure. It was this event that got me digging more into FDR's persona and character and how I found out about the rest in these articles.

To give you a little idea of the man (FDR), here's a true story about an exchange that Stalin, Churchill and FDR had in Tehran, as relayed by his son Elliott (who was there). The intent of the story was to make fun of Churchill, but to me it shows more about FDR (and Elliott).

This to me shows how desirous to please Stalin that Roosevelt was, and also clearly demonstrated either Roosevelts ignorance of diplomacy (and the message he was sending), or his indifference for human rights. Of course 10's of thousands of German soldiers (especially officers) were murdered before Soviet firing squads, and many more were worked to death in slave camps.... while Stalin might have done so anyways, had been given tacit permission by FDR. Because that's the kind of guy Franklin was.

So what was FDR's Legacy? Sadly the facts are not close to what is taught in our schools or repeated often by people that haven't done much research.

We are sometimes taught:

What we are not usually taught about when discussing FDR is the double-dealing and back-stabbing, one of the greediest, most self-interested, corrupt and power hungry liars to ever taint the office. When we look at a President's legacy, we should remember everything that happened under his ternure, and everything that happened afterwards because of his actions -- not just the side that makes progressives feel good about themselves (like interning the Japanese). The dirt and shame is important, so that we can learn from our mistakes, instead of electing more of them.