From iGeek
(Redirected from Category:Environmentalism)
Jump to: navigation, search 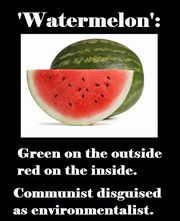 This is a faux environmentalist, someone green on the outside, but red (communist/socialist) on the inside. Environmentalism might seem to be their cause, as they champion everything that's anti-humanity and pro-authority. But authoritarian regimes are their true passion. Some aren't self-aware enough to realize that they are watermelons: Vladimir Lenin and the USSR used to call those people "useful idiots" - non-communists regarded as susceptible to communist propaganda and manipulation.

You can if an environmentalist is real, by whether they lead by example. (Eat their own dogfood).

People that think burning fossil fuels is the most significant factor in CO2, and that CO2 is the biggest significant factor in climate change, are kinda clueless on the math/science. Everything by humans does contributes -- razing the ground to build houses, what we eat, breathing, driving, clothes, travel, building/improving and especially, kids. Concrete is especially carbon releasing. Almost everything you do, creates CO2. More so if you're having kids that will use carbon as well. So if environmentalists are sincere, they will make choices accordingly.

The point isn't that you're wrong for doing it. It's just that you're a hypocrite if you're willing to live like that, and lecture anyone else on their SUV, or pretend that buying another carbon negative toy, like a Tesla will somehow make up for it.

The point is that math is math, and logic is logic.I'm not attacking other for having kids, or their lifestyle choices.... unless they're being a hypocrite and trying to preach on mine.

If Watermelons care about the environment as much as they care about attacking other people's choices, they'd be making RADICALLY different choices in their own lives. That's NOT an extreme position, that's common sense. Which means their real agenda isn't the environment, it's an excuse to tell others what to do, and make them make the exact same choices they do.