From iGeek
(Redirected from Category:Earth Day)
Jump to: navigation, search 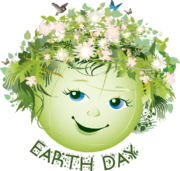 In honor of an invented fake-Holiday (Earth Day/Week), my office celebrated voluntary meatless Monday. I'm not sure what one has to do with the other.... what I'm sure of is that celebrating a Holiday invented by watermelon's (green on the outside, red on the inside), loons and kooks, to celebrate peace and balance by taking away people's choices (to get meat), is something so hypocritical, and so the new normal in California.

While I don't really care what causes people support (even stupid ones), I do like people to be informed the on the stupid causes they support, and who is behind them. Detractors of Earth Day claiming it's an green wrapping around Marxist agendas, while the proponents claim, "No. It's all moderate folks just trying to protect our planet and peace". When you research the history of Earth Day, it becomes obvious which side is informed, and which isn't.

To remember how worthy a Holiday is, it's best to remember who created it, why, and what has come of it. So to understand why the informed think Earth Day is a leftist front for anti-capitalism and watermelon environmentalism, you have to first understand the people who started the movement, and why. 10 items

Often called the Founder of Earth Day/Week, Dennis Hayes also created Bullitt Foundation dedicated to ensuring the Pacific Northwest is the most “progressive” region in the nation.

Nelson’s teach-in (propaganda) efforts were aided by a young man named Denis Hayes. Hayes was student body president while at Stanford, and well known for organizing anti-Vietnam war protests. Hayes heard about Senator Nelson’s teach-in concept and eventually helped Nelson institute the practice nationwide, and was praised and awarded for helping to stage a huge protest over something that no one disagreed.

A sampling of his eco-activities includes:

Gaylord Nelson - Earth Day/Week's Marxist activist and Co-Founder Senator Gaylord Nelson (D), a Pi Kappa Phi frat-boy, was another anti-war activist, environmentalist, population control advocate, and he later was one of only 3 (all Democrats) to vote to oppose Gerald Ford to be Vice President. He was an avid supporter of the violence by radical leftists of the time: cars being burned or buried in filth, activists dumping garbage in corporate lobbies, and various anti-capitalist (pro-environementalism) hippie-protests that were happening in the 1960's and 1970's.

Ira Einhorn - Another Earth Day/Week Co-founder is Ira Einhorn, who was famous in the counterculture, anti-establishment, and anti-war movements of the 1960s and 1970s (known as). He was the MC (Master of Ceremonies) for the first Earth Day, held in Philadelphia -- and was known as one of the co-founders. Of course, his role was later downplayed by people that wanted to distance themselves from him -- but at the time, he embodied the movement, and was loved by all for his views.

Why would leftists want to distance themselves from Einhorn (when they celebrated him at the time)? Because by 1977 he became known as the "The Unicorn Killer" after his ex-girlfriend Holly Maddux was found mummified in a trunk in his closet: packed in Styrofoam pellets, air fresheners, and newspapers. (He called himself the Unicorn because "Einhorn" in German, translates to one-horn in English).

He was eventually (2001) extradited to the U.S. from France (where he was hiding out), and convicted to life in prison -- despite his testimony that Maddux was murdered by CIA agents who framed Einhorn, because of his "investigations" on the Cold War and "psychotronics". This is the guy that embodied the Earth Day movement.

John McConnell - The forgotten first founder of Earth Day/Week was Pentecostal John McConnell who sponsored food for Hong Kong refugees, and later "a minute for peace" to just think about peace and the wellbeing of others for one minute a day. He decided if a minute was good, a whole day would be better, and after a speech at the U.N. (UNESCO), that became a global holiday to celebrate Earth's life and beauty and to advance peace, set for the Spring Equinox (March 21, 1970) or "Earth Day". And if the story stopped there, it would be fine. But it doesn't stop there.

Like often happens, when you feed the trolls (or Politicians/Glory-Seekers/etc), that take ideas (and taxes, laws, regulations) and pervert them for their own agendas. John MCConnell's dream fell victim to this truism.

Remember the early message of Earth Day/Week: anti-population and anti-humanity. With that came not only pro-birth-control, sterilization, pro-abortion, eugenics, racism -- but also anti-immigration. Enter John Tanton, early earth day supporter, and founder of many America First, anti-Immigration charities and non-profits (FAIR, U.S. English, ProEnglish, The Social Contract, and Society for Genetic Education). He was very welcomed early on, and tolerated later on. While the far-left supports all/most of the same causes as Tanton, they don't want to be seen as supporting those things, so there's sort of a love-hate thing going on. He's like their ugly girlfriend, that they want to come over for a booty call, but use their back door in the dark, so the friends/neighbors don't see her visiting.

Organized Labor and Earth Day - When Earth Day was started, many of the organizers mentioned that without the hyper-progressive (marxist) UAW and AFL-CIO money and support, they couldn't have got this "Holiday" off the ground. Ironic that the far left Socialist Workers organizations didn't realize that the far left Environmental organizations would turn on them, and work to end the formers existence.

Professor Paul R. Ehrlich did a shallow plagiaristic pessimistic derivative of Hardin and Malthus, entitled "The Population Bomb". Basically saying that if you didn’t give government all your money and rights now so they could enact compulsory population control. there would be mass starvations and war in the 1970’s and 1980’s that would wreck civilization. He is credited with being one of the founders or at least inspirations behind Earth Day/Week. Despite the opposite of all his predictions coming true, he claims to this day that his book was, "way too optimistic”. Showing this old dog can’t learn from his mistakes. And because his ideas were so wrong, and derivative, he’s won every award the left can throw at him: Sierra Club, World Wildlife Fund, MacArthur Prize, UN, American Institute of Biological Sciences — it’s like the whose who of those that don’t know what’s what.

I'm not going to decompose all the things wrong with Ralph the Mouth. Either you know about his repeated failures as a Presidential Candidate for the Green (and Red) Party, his positions leading our Anti-Nuclear efforts that did far more harm to the environment than millions of other individuals could have. He never met a government regulation he didn't like, until he found a more intrusive one. But he's always been a vocal supporter of Earth Day, and any other far left, anti-business causes.

Saul Alinsky - If you need a far, far left fanatic, then you better call Saul. He is the epitome of post-modern Marxism: undermining everything that is established good, supporting subverting the establishment, promoting lies for a "good cause" (defined as anything Saul agrees with). To quote from Sixteen Candles, Saul is kinda like the king of dipshits (I judge him partly by his followers). He deserves credit for being their leader, but they say you can judge a man by the company he keeps, and that's how I judge both Saul and his followers. He advocated for many things, like Climate Scarism, but only because it furthered his agenda of destabilizing our government and created an excuse for taking over people's lives.

Sierra Club - My Uncle was a gay card-carrying-Communist: seriously, he'd take out his Communist card and show anyone. He was also a fan of the Sierra Club. I learned early in my youth that this coupling of far-left movements was not the exception but more the norm. It turns out if you hate civilization, and you want to slow it's development, then putting the government in charge of everything (means of production, land, breeding, etc), is a great way to stunt that development. So environmental groups and Communism go hand in hand.

Basically, the Precautionary Principle is everyone has to prove there's no unintended consequences before implementing or selling anything. This is the idea that in the words of Brower is, “All technology should be assumed guilty until proven innocent,” especially things like GMO's or anything that betters humanity. And they can always think of things for you to disprove, longer than you can stay in business.

Politically, it's hard to say "no", but it's easy to say, "we should test this more before releasing it".... when practically they mean the same thing. Obama (the community organizer) used this technique for pipelines and drilling, "we'll get back to you on that", meant, "Never, but we're too chickenshit to say it". Sierra Club is all in on that.

Earth Day has always been about Scare Tactics. First it was Global Cooling and littering. Then it was that we were running out of landfills, peak oil (and all other resources), and later global warming. Once it stopped warming, they switched the terminology to "Climate Change". There was destruction of rain forests or wetlands was one of their scares. Always there's been extinction of species that would be the end of us (like the Beepocalypse. Now it is plastic waste or ocean acidification. Chicken little is desperate to get your attention.

There's a ton of silly exploitation in the name of the planet. Like going to electric cars which are browner in every way but tailpipe emissions (which is the least of our problems). Another example I like is Apple. In order to up their green cred, they go to all these environmentally safe materials for their cables, that wear out faster and create more pollution than they help. But if they try to work with Greenpeace or other environmental loons to explain, "if we use a little of this plastic, it'll reduce wear and save in the long run", those are nuances that beyond environmental activists. They demand being greener, by using materials that are far more wasteful to the environment.

In announcing the first Earth Day celebration, the Cleveland Press headline summed it up perfectly, "Hippies and Housewives Unite to Protest What Man is Doing to Earth."[1] While a little condescending, it was closer to the truth than anything the NYT would publish on the topic today.

In the end, both Marxist and Environmentalists can't tell the truth, because that wouldn't advance their cause. "Things have been getting better despite our warnings, so lets change everything!", isn't a good sell. So when you know the truth is unpopular, and you still want your agenda, your only option is to give up your dreams, or lie. Most choose the latter.

For example, while Earth Day sells itself as some rainbow coalition, the truth is they're not very open minded (as seen how they treat people who disagree), and more exemplified by the history of the anti-humanity and anti-immigrant views of many of the founders and proponents. Or despite it being sold as a day of celebration for the Earth and Peace, Earth Day has never been a celebration of the beauty and bounty of this awesome blue marble. Instead it’s always been an assault on humanity.

And so on, and so on. But if you mention the failures of their past predictions, they'll attack you like Stalin on a capitalist street vendor trying to feed his family. While the problem of the day (year) keeps shifting, the cause (humans) never does. And their solution is always the same: give them (government) the power, to take away your liberty, and they'll protect the trees and environment from you. Just like the USSR did in Chernobyl, or China does as the greatest strip-miners in history.