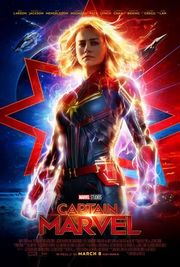 Captain Marvel character was in DC and Marvel Universes, and do to legal issues, was a series of characters. In 2012, they made Ms. Marvel into Captain Marvel and the screenplay was started soon after. There was a ton of politics around creating Feminist Superman -- and the reviews were getting trashed before the film came out. But out of curiosity, I went and saw it, and despite a few flaws -- it was one of the better Marvel movies. (I preferred it to Black Panther (2018) which was also the obviously Black Justice Warrior).

This movies starts with no backstory, and the amnesia/nightmares trope... where we slowly get pieces in flashbacks that don't make sense. It's not fast paced at the beginning, but you get the basics: Kree Empire's capital planet of Hala, Starforce member Vers, combat, badass with energy blasts from her hands, planet controlled by an AI God, shape shifting enemies, yada yada yada. Interesting enough but the first 1/3rd was kind of weak-sauce clirché drek, if that was going to be all there was, for 2 hours... but the plot kept shifting and getting more interesting.

Eventually, they get back to earth (in the 1990's), the backstory starts to make more sense, and it's an origins film about Coulson and Fury as well as Carol Danvers. The plot kept moving with predictable but face paced twists... and getting to know Fury, and a little Coulson and S.H.E.I.L.D./Avengers, was worth the price of admission. And while there were plot-holes and stupid things they should have filled in more (how does shifting into someone's shape give you their memories), and stuff like that -- overall it was amusing once immersed in it. And I like ones that have humor weaved in, and this one had quite a bit, once the story got moving.

I far prefer individual super-hero films with a lot of backstory to the ensemble film chaos and one-liners of the Avengers. So this one fit what I like. By the end it runs into the same issue I had with SuperMan and Wonder-Woman films -- I don't like the omnipotent Super-Heroes that are more God-like than Human (way too overpowered). And she falls into that category. But the film still played really well for me, and while there was a little dose of "Girl-Power" stuff, I didn't see what all the hoopla or negs (negative reviews) were about. I'd recommend it for being a good Super-Hero film, if that's your genre.