There was a kerfuffle because Donald Trump decided that if Canada could put a 270% tariff on American Dairy products, then the U.S. decided we could tax their steel and aluminum. The Canadians naked emperor (Trudeau) talked smack behind Trump's back, but their position isn't defensible face-to-face. 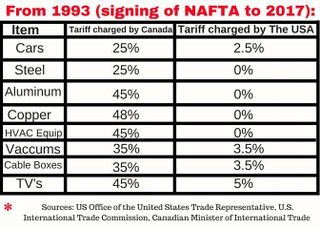 Of course their Idiot Savant in Chief (Trudeau) -- a little man with delusions of grandeur and a poser, took offense and made a stink behind Trump's back (but not to his face) at the G7 summit. While Trump offered for much more free trade (if the EU wanted to get "free" and open as well), Canada/Trudeau didn't want free/fair trade, he liked unfair trade in his advantage (his tarrifs on our goods, and none on his).... and had a little tantrum.

The Press carries the water of anyone with an anti-American or anti-Trump position: so they failed to offer the context of why Trump put in the steel/aluminum taxes in place (in retaliation for Canada's tarrif's, and to prevent China from just passing goods through Canada and getting around our tarrifs on them), and made it seem like it was the world against Trump -- when it was a few anti-American countries against our representative. Thus the readers of NYT, WaPo, and other far left outlets will have one impression: that Trump just stuck his thumb in the eye of an ally for no reason. And the less ignorant and more informed (not the readership of those outlets), will understand more about the nuances, and why Canada looks like idiots and hypocrites on free trade, and knows why they can't trust the mainstream media to tell the truth.

Of course outlets that take Canada's position in all this (instead of America's), are missing the point (or intentionally distracting from it). That's that Canada does have some protectionist policies and industries: and that's what Trump was trying to address. Distractions about service trade are off-topic from that point. If Canada is going to do that for things like Milk Products (which they somehow consider vital national interest), then we're going to do it back to things like Steel and Aluminum. And you can like/hate fair-trade and trade-wars, but at least be honest enough to admit what is happening and why.

The ignorant Canadians decided that a boycott was the best way to convert this from unimportant collateral damage (and it would have gone away once Chinese concessions were achieved), to making Canada an example that must be made. Their fragile feathers were ruffled, and they turned something that they would have done in a heart-beat, into a "Cause" for the gullible. And if they raise enough of a stink that Americans notice, they'll retaliate. All because Canadian press and their hyper-liberal politicians, picked a fight they didn't need to.