The first time I broke my arm, I was about 7. I did it on an after school swim team that I was on. But it begs the question, "How did you break your arm on a swim team?"

One day I'd finished and was walking back to the changing room. The guys locker had two concrete block walls. Some kid put his hands on one wall, and feet on the other, and was walking up the wall. That was brilliant.

I was strong enough, and I tried. It was amazingly easy, I could walk up, and laterally. I was about 6 feet up when one of the older kids, who couldn't do it, and wasn't particularly impressed with me showing him up, decided to get me down. He jumped up and slapped one of my arms free.

I was squealing like only a stuck pig, or like only a seriously injured 7 year old can; and the kids rushed me to my Mom.

My Mom was had the bedside manner of Nurse Ratchet. She said, "stick him in the pool, the cold water will make it feel better".

While I was screaming "no", they kinda threw me in. Since I couldn't move the arm well, I started sinking between my screams and one-armed flailing and so on, and they figured out that something might be wrong.

They pulled me out, between my wails and staring daggers at my murderous Mom who tried to drown me, they decided maybe we should go to the hospital, and spoil my Moms dinner plans.

They of course X-rayed it, and found that I'd fractured my arm at the elbow. This put a little guilt on my Mom for her apathy at my distress; but I was used to it, and it wasn't going to change her into being a compassionate person. 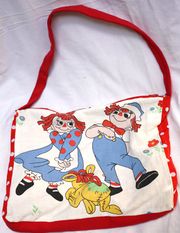 Where I'd broken my arm (elbow) meant they didn't want to put it in a cast, but instead used a sling with a brace, so I could move it (and keep the joint from locking up, or some such). I was a small kid for my age, and the only sling they had for my age was a Raggedy Ann and Andy pediatric sling. (A bit like the picture on the right)

I looked at that, and thought, "fuck no!" This was the 3rd grade equivalent of a "beat me senseless" sign around my neck; and explained as much.

As usual, the adults wrote off the precocious little smart-ass that was obviously over-stating things. The adults would never wear such a stupid looking thing, but had no compunctions about making me wear it.

The next day, I begged not to have to wear that thing to school. I was already picked on for being a small brainiac. And of course, I was ignored and my views discounted. (Adults were so stupid).

Lord of the flies had nothing on my elementary school. By the second day of begging my parents to figure something else out, and the finger pointing and laughing and so on, I just threw the sling into the trash. It hurt like heck to carry around my wrapped arm either in my other arm, or holding it out to my side like a chicken with a broken wing - but that was better than the alternative.

When I got home I just played dumb about the sling, "I don't know where it is", "kids took it" and so on. My parents knew I was lying, and I knew they knew I was lying; but in a battle of wills, they weren't going to win this one. We made a sling out of a pillow case.

The self shredded sheet thing looked very revolutionary war; I needed a fife player following me around. At least that was more dignified than floppy little rag-dolls.

More than a dozen times, kids would see the homemade sling and not having a full cast, and think I was faking it - and thus punch me in the arm to prove it. I'd flop around curse, scream or kick them. Still, that was better than the humiliation of the missing sling.