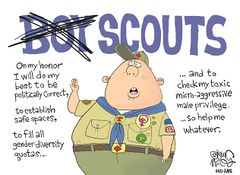 Boy Scouts is ruined by SJW's, like everything else they touch. That doesn't mean I think the new "Scouts BSA" will be a bad thing.... just it is not the same thing that the Boy Scouts was. I suspect the new thing will be different and better in a couple areas, and worse in a few others, and what the old Scouts was (their purpose), will be shat on and lost over time. Another opportunity to educate boys will be taken away, in the name of radical feminism (or some other false flag that's really just a front for radical feminism).

Extreme feminism believes in the destruction of safe spaces for males, and tearing all their institutions down, while defending Women-only safe spaces, under the delusion that unfocused men, with little purpose, and a lot of anger/frustration will somehow benefit women. When all it really does is make for a less cohesive society. (Blur the lines between all the roles, and you don't get more harmony, you get more confusion). See groups like Incel.

I was a cub-scout and in the Webelos, and I had gotten many merit badges -- but scouts was too slow for me, and I preferred to do things on my own. I don't mean alone, I often took friends on adventures. But when I wanted to do something, I dove in, read a few (or many) books on the topic, then went on to self-discovery mode, rather than formal/structured learning that the Scouts offered. So while I only dabbled, I dabbled enough to get what they were about. My brother did Indian Guides instead, and I helped him with some projects and went to a few meetings/events -- basically the same thing to me, just with a YMCA and Native American theme.

So while I remember working hard on a dozen or so badges, I was too young to go for Eagle Scout, and many of the badges stopped before I'd hit a level of mastery or understanding that satisfied my desires or curiosity. Thus, I often went beyond them on things I had interest in, and wasn't going to complete ones that I didn't: even if it prevented me from progressing. Still, I have fond memories of that time. 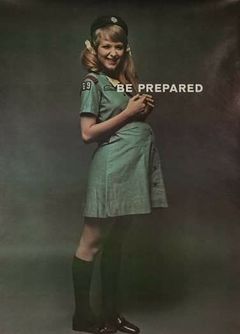 Just a reminder of the ancient past, when the scouts were created, there were dozens of scouting-like programs. The idea was keep boys focused on something other than getting in Girl's panties, and getting them skills to make them more productive in life. And many programs were trying to indoctrinate them. You had the Vatican, the National Socialists, and lots of intern programs to turn proto-men into willing subjects... but the Boy Scouts less political and more Western Christian-Values focus won out. The only scouting program that let girls in their mix back then were the Nazi's youth program. Again, not saying that you can't make a good program that's co-ed, just that the idea of feminizing men by co-educating them, is not new and unique to the modern Scouts and left, it goes back a ways. It does signal that the focus has changed from making boys into men, into making kids into subjects of a left leaning agenda.

The point of boy scouts is to teach boys how to be men. Women (or girls) are a distraction from that. Boys start trying to impress the girls, or get into their little panties: it's the way they are wired. You get them apart from girls, and they focus better, and they are in a different mode. They don't act up as much, they pay less attention to the cute girl with braids, and more to the task at hand. This is the reason many private schools were boys/girls only schools: it helped the kids focus on learning, and not on pre-mating rituals.

Radical Feminists can't stand place where girls are excluded, while simultaneously trying to bar boys from areas where there's Women... unless the guys are feminized and "transgendered", then they want to pretend that no guys would ever lie to see some strange. It's double-face-palm stupid, but it is what it is.

Boy Scouts prepared boys to adventure, hike, do good deeds, take risks, plan, worry, risk their lives to help others, and use various weapons, crafts or trades. All somewhat practical or at least interesting skills to boy. So it isn't that boys clubs failed to change with the times, all their stuff was still practical and there's absolutely no need to update it by adding girls. The real failure was that girls clubs didn't change enough, and they are seen as a problem.

Girl Scouts was squeezed by changing times, but not changing fast enough for progressives:

So the same way that radical feminists destroyed Home Ec and got many schools to stop offering it (despite the actual value to proto-adults), they also attacked and ruined Girl Scouts. It can't be what it used to be. And it can't succeed at what radical feminists want it to be, so it has floundered and become about selling cookies that they didn't bake.

NOTE: I know that above phrasing will probably get some feminists panties in a wad. But that's them being poorly socialized and not listening or caring what the other side believes. I don't think ONLY Women can and should cook, clean and sew. I think boys should learn that stuff too: I took home economics for those reasons and learning those skills.... though there's a couple merit badges in there for learning them too. So it's not all camping. But if you look at which badges kids gravitate towards, girls don't tend to gravitate towards learning how to change a tire, and boys don't gravitate towards diaper changing -- even if they both should.

So the problem isn't the Boy Scouts, it's with the Girl Scouts and with feminists and progressives that feel they must remake everything that isn't broken, into something that works worse for all. 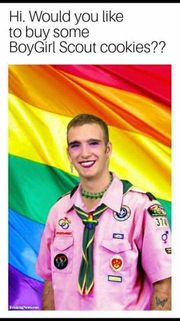 Now, I realize that not-every girl in the boy-scouts is going to end up impregnated, especially with reasonable supervision... but impregnating women (or at least going through the motions thereof) is something that boys think a lot about, when there's a girl within eyeshot. No one has or will explain why boobs and vaginas within their line of sight is going to help the boys to learn and grow into men. Nor why surrounding girls with boys, is going to be better for her development either. It gives both distractions, and changes their focus.

Girls crave attention, and they will get it. But girls in that situation tend to focus on the attention more than learning: they're not immune to the wiles of the other sex much more than boys are. And while not everything has to be about sex, we're talking averages, statistics and realities -- not about what should be, but what is. And there's no doubt, that if you put large groups of girls and boys together, that their attentions stray from tasks at hand towards other biological imperatives.

Will the new Scouts work? Probably. I suspect the new thing will be a nice co-ed camping and hiking thing, that will be populated with 90% boys... but the 10% of girls will be better served by Boy Scouts that they were in Girl Scouts. So win for them, and I wouldn't be against it for my hypothetical daughters at all. (Assuming I have one of the more tom-boyish one that wants to get all campy/rugged). But let's also be adult, and admit by doing this, we ruined one of the last sanctuaries to turn boys into men. Like fatherless homes, I think there will be costs to this, that cost us for many generations.

Just to make sure the girl scouts don't all end up teen mothers, and to stick with their motto of "be prepared", the boy scouts started requiring condoms be given out freely at their World Jamboree. Ignore how bad the optics seem on that. [2] Of course Snopes jumped in, and offered a little value wrapped in a lot of partisan silliness: declaring it "mostly false" despite it being 100% true. The condoms are being given out. Period. But they have been given out for decades, so this isn't technically in response to allow girls in the scouts. But this policy, does look bad in the face of the New Scouts pan-gendered policies.

Only one week after changing their name, The Church of Jesus Christ of Latter-day Saints (Mormons / LDS ), one of the great supporters of scouting for 105 years, has announced plans to sever ties with the Scouts, which means the Scouts lose 425,000 members (about 1/5th of their total members).[3]

This isn't counting how many non-mormons will drop out, not sign up, or look at other things to spend their time on. And the mormons will create their own program to compete with the "Scouts", and likely peel many more potential scouts away over time, and maybe help with Church enrollment.

Of course the mormon's success at creating a competing program (for more than the half a million they have participating) will be for those who want their kids to learn what the scouts used to stand for, instead of a merit badge for memorizing the 57 different genders and all their pronouns. OK, that barb was a little unfair, this was a minor move by the Scouts, and not FULL buy-in to progressive politically-correct dumb-fuckery... but the Scouts have shown a trend in that direction for the last 5 years, and there's little evidence that's going to slow down under current leadership. They started with gay scouts, then added gay scout-masters, then added transexual scouts, and now, dropped gender altogether. I personally, have no problem with those moves for myself or my kids (heck, I especially don't think gay kids should be cast out, just because they're not closeted), but I have no problem with people who do have a problem with those rule-changes either. And it's no surprise to me that many in the nation/work might want to send their kids to a scouting program for scouting, not gender studies sensitivity training and indoctrination.

The Mormons rightly called out why as, they're a global institution, and this left coast myopia that the Scouts is following, does not fly well in most of the nation, let alone world. So they're going to create (recreate) a more global inclusive program, that leaves room for traditional values, which is obviously at odds with the PC Scouts. So the truth is, I suspect the mormon program will better serve the traditional customer base than the new Scouts will. At least for the next few decades.