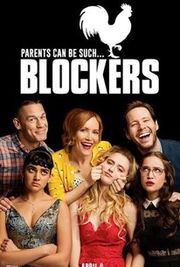 This is kind of the opposite of your normal kids coming of age and seeking to get laid films of yesteryear. Instead of boys going on an adventure seeking to get laid -- this was 3 teen girls making a sex pact to lose their virginity on prom night.... but this movie really isn't about them. It's more about their incompetent parents trying to cock-block their plans, which is why all the promotional posters have a rooster next to the title "Blockers". Yeah, as subtle as the movie. The movie had its moments, unfortunately most of them were in the trailers. Watchable, and funny in spots... but you could miss it, and not really miss much either.

The movie got am 82/51 Rotten Tomatoes (reviewers/audience). I had seen the 82 part, and figured it was probably pretty good... but more often, I side with the audience. And this time was no different.

It wasn't horrible... in fact, it was kind of fresh for the genre. But to me, it just wasn't that funny and it fell far below its potential. And it had to hit every cliché'd note it could: parents are all crazy buffoons (or really into some kinks), kids never make bad choices (Parents are just a bag of not-getting-over-their-own-bad-choices), drugs aren't bad for you (all part of the adult conspiracy), one kid had to be gay (lesbian) and come out to friends... who didn't feel any shock or betrayal over hiding that from them for a decade, and so on. Again it wasn't bad... it just wasn't that good. Everything felt very formula, with some not very funny writers.... either that, or I'm just jaded and all the shocking humor has already been used up in the genre, so there's nowhere to go but repeats.

I know, maybe I'm expecting too much from a sex-commedy. But I just expect a lot of good one-liners and inappropriate humor. Everyone can remember many scenes from American Pie, Superbad, Fast Times at Ridgemont High, Risky Business, Something about Mary, The Hangover, and so on. These movies are sort of the shock-jocks of humor, just going to absurd places -- but while all of them are about as good for you as deep fried twinkies -- you still are left with enough laughs and regrets that you got your money's worth. Here, meh. I don't feel ripped off... but I probably won't remember anything about this film in a year either.