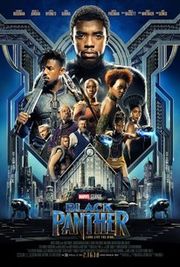 The first Marvel film of 2018. I was almost scared off by the SJW's and BLM types ranting about how groundbreaking this was, or saying retarded things like the first Black Superhero film (other than all the others). The more they hyped it, the more I wanted to skip it over concerns it was going to be filled with Afrocentrist stupidity.

But I did see it, and despite having a bit of Superhero burn-out, it wasn't bad, and slightly fresh and only a little shallow. I thought it was definitely in the top 1/3rd of Marvel films, about equal to Thor: Ragnarok. Though Black Panther took itself a lot more seriously than funny.

I go to movies for escapism, story line, entertainment, to learn something... but not to get a bunch of SJW intersectional black liberation theology crammed down my throats. Sanctimony makes me I think, "Go force-feed your dogma to Rachel Dolezal and Black Studies victims".

Don't get me wrong, I get that "life isn't fair"... but how many times can you hear stupidity like Asian's over-representation in our school system, or Indian immigrants average income being double the white average, is because of white supremacy, before your gag reflex kicks in? I can only take so much white race-shaming before I want to avoid anything put out by Hollywood.

USA Today liking it was one strike against it.

Then another strike was they retardedly saying things like this was, "The first superhero movie to star a black lead character...". Really? You mean other than Django Unchained, Catwoman, Blade (all 6 of them), Shaft, Meteor Man, Men in Black, Luke Cage, Cleopatra Jones, Foxy Brown, Abar, Vixen, Steel, Blankman, Sleight, Hancock, Spawn... and a dozen more. And that's before looking at major superheroes and co-leads in ensemble films (like all of them in Marvel/X-men). Other than those? Morons.

Then Brietbart jumped in with their humorously trolling review: ‘Black Panther’: The Movie’s Hero is Trump, the Villain is Black Lives Matter. If both sides kinda liked it, that was a bit redeeming.

And that their review caused a landslide of snowflakes to decry the positive review: how DARE the anti-semitic and Jewish founded website like it? let me know they might be on to something. (And yes, Brietbart had a pretty good point).

The reviewers split on Rotten Tomatoes (97/77%) was a hint that the reviewers were ahead of the audience on this one... but not by that much. 77 isn't bad. And even if it was over-hyped, everyone was going to see it, and I just wanted to have an informed opinion, so I decided I'd give it a try. And it didn't suck.

Don't get me wrong, it wasn't as good as the reviewers pretended -- and it still had a lot of clichés and fallacies. But it was good. 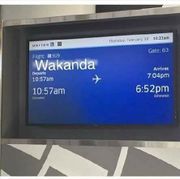 So despite the histrionics of the media, pretending that this is great, groundbreaking, and the first all black cast since The Wiz (Please ignore anything by Tyler Perry), it actually wasn't bad at all.

It was more Super Hero movie than lecture. It had a fairly predictable story about a hero and a villain. The characters a little shallow. The acting completely tolerable. The action a little humdrum. But they do get into some amusing Africanisms in fighting, dance and dress to give a style... that style would have been called blacksploitation, in another era, but it kinda worked in this one. And the story held my interest, pacing pretty good, and I left feeling I got my money's worth.