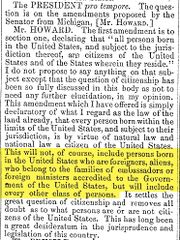 Trump did an interview with Axios where he said he can end Birthright Citizenship (an imagined right) by executive order[1]. This drove the far-left nuts (not a long trip), just like they happens when he says anything. They claimed in unison:

The facts are there's an open question about what the intent of the 14th when written when it said, "Section 1. All persons born or naturalized in the United States, AND SUBJECT TO THE JURISDICTION THEREOF, are citizens of the United States and of the State wherein they reside"...

The Chief Sponsor of the 14th Amendment (Jacob Howard) put "subject to jurisdiction" clause in so that (to quote him), [The 14th amendment] will not, of course, include persons born in the United States who are foreigners, aliens, who belong to the families of ambassadors or foreign ministers accredited to the government of the United States. So we clearly know what the original intent was, and how it was sold to the public, because we have pictures in the paper of what was said by the sponsor. [2]

This went further as there were various legal fights (and almost unanimous agreement among the 14th Amendment framers) that the 14th did not extend citizenship to Indians, because "they owed allegiance to their tribes and not to the U.S." Lyman Trumbull, chairman of the Senate Judiciary Committee, supported this view, arguing that “subject to the jurisdiction thereof” meant “not owing allegiance to anybody else and being subject to the complete jurisdiction of the United States.” (e.g. until they were naturalized and renounced prior allegiances). So if this didn't apply to Native Americans because of their past allegiances, how could this possibly apply to illegal immigrants?

So what we know is that:

So there's a strong case to be made that the 14th doesn't apply to illegal aliens (since they're not under our jurisdiction) and it would have been insane for the authors of the 14th to intentionally dilute the rule of law and weaken the Executive's (President's) discretion on immigration, without explicitly calling it out as an intent -- which no one has ever shown was an intent. This whole invention that it applied to illegals wasn't really invented until the 1960's.

Of course the left won't let sheer logic and reason or the rule of law (like original intent) get in the way of their lies.

So while the Supreme Court never ruled directly against what Trump is claiming, and logic and original intent support his view, there was a ruling US v. Wong Kim Ark (1898) to imply birthright citizenship -- maybe. That 5-4 ruling said that a child born in the United States, to Chinese LEGAL immigrants, automatically became a U.S. citizen. However, Chief Justice Melville Fuller argued that contrary to the reasoning of the majority, the 14th Amendment did not in fact adopt the common-law understanding of birthright citizenship and was wrong. So a Supreme Court review could easily reverse that bad ruling on challenge, as it was obviously NOT in the spirit of original intent of the authors of the 14th Amendment. More importantly, it never applied to ILLEGAL immigrants (what we're talking about). So the Supreme Court has never ruled on the idea of illegal immigrants getting "birthright citizenship". But the left wants it to have done so, so they just lie or imagine that Wong applies to illegal aliens, even though it never did.

Anyone that omits all that context/ambiguity is either a liar, or ignorant of the basics of the topic -- and neither reflects well on them as a journalist, politicians or as vaguely qualified politico's to discuss the topic.

The point is those accusing the President of undermining the law are either ignorant or polemics.

Logic seems to indicate he is on the right side of the ruling. But we won't know until he tries and gets the Supreme Courts ruling on it. And the only way to get them to rule on it, is to test it by creating an exec order or passing a law that forces a decision up to the Supreme Court in the first place. So if you think you are right, you should be demanding the President prove you right. The fact that they're trying to shout him down as tyrant before the ruling says that they're afraid of the truth. But until we learn which way the court will rule we can't conclude that the President is wrong, and in fact, because the executive has De facto authority over matters of immigration and national security, it's safer to assume he is right that wrong. Thus all those FakeNews outlets [3] having tantrums and claiming the President is wrong and violating the Constitution (over a somewhat specious interpretation of a bad ruling), are discrediting themselves and the media in general, by assuming facts that are not in evidence and intentionally misleading the public that he is clearly wrong, when most of the evidence implies the opposite.