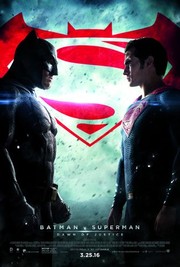 I don't like the theory of this movie: in the DC universe, Superman would tear Batman apart like a terrier with hamster. So I wasn't going to see it. But a few friends had seen it and said, "if you go in with low enough expectations, it won't be quite as bad as you expect". And my wife was out of town, I'd paid to see The Green Room, and this was starting at the exact right time in the theater next door (after my main feature had ended) -- so a little matinee sneaky double-feature action.

Reviewers hated it, but viewers didn't think it was quite that bad with a 27/68 on the rotten tomatoes meter. And for free, it wasn't bad at all. It was long, and wasted too much explaining who Batman was, and flashbacks and dream sequences were heavy handed. It had sort of a weak-sauce on why do these guys wanna fight? Who put Metropolis and Gotham across the river from one another, and why did the super-heroes and criminals not cross over more? But as my wife would say, "THAT'S what you had a problem with in that movie?" 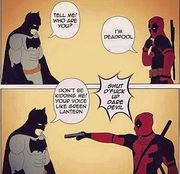 I don't like the Superman movies, because he's so boring. And some of the Batman ones have been fun because of the much darker edge (at least in the recent Dark Knight reboot that was quite good). This was in-between: the darkness and edge of Batman made the sickly sweet trickle of Superman almost palatable, and Mark Zuckerberg did a good job as Lex Luthor. So overall, I have to agree, if you go in with really low expectations, it probably won't be as bad as you expect. But any expectations above a very long TV show (with bigger effects), and you probably won't have them met.

So if you like the characters or Universe, and you want to watch a very long prequel setup film for the Justice League (hence the subtitle of "Dawn of Justice"), it's not nearly as bad as Fantastic Four, Green Lantern, Daredevil, or Supergirl.