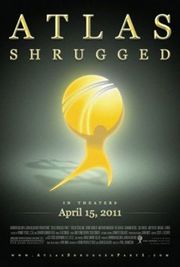 I recommend it with reservations. How much you like it will be influenced by how much you liked the Book (and how high your expectations are). I was a reserved fan of the Book, and my movie expectations weren't very high. So I thought the movie was really good (better than the Book). The whole plot is basically like 1984 or Animal Farm (and follows the book) -- it was about how a well meaning collectivist society keeps punishing the producers and rewarding the slackers, until society crumbles. (Those producing the most, go away. E.g. Atlas Shrugs and the world falls).

I was a modest fan of Atlas Shrugged. It had the same basic lessons of Animal Farm, 1984, or Robin Hood, with a LOT more words. But it was and will remain a formative piece for many people. And it got me to read what I think were Ayn's better, earlier works. ("We the Living" was her best and shortest work for me, because it left the responsibility of conclusions to her reader. And because it was almost her autobiography). Atlas Shrugged was much heavy handed with long monologues and told in such a ham-handed way, that it had all the subtlety of dynamite fishing. But the lessons were good and pointed (if a bit overplayed and simplistic). This movie managed to fix many of those things I didn't like about the book for me. I didn't go into this movie expecting much. An obscure production telling a long-winded story with almost a religious following: what could go wrong?

Surprisingly, I thought it was really well done, FAR more subtle and much better acting than the book. And because it was a Part 1, I think it had to leave more to the viewer than the original left to the reader: which was an improvement. The political timing: with Obama's economics speeches getting plagiarized almost word-for-word by Mr. Mouch, made it amazingly attuned to the times. (Even if by accident). And while it ended a bit abruptly (with many open questions), it was at a well timed spot in the book (at least as good as Star Wars IV). So it left the viewer wanting more, while still remaining complete on it's own.

However, I have less hopes for the next 1 or 2 in the series. It isn't fast as is, and I expect the remainder to drag and either follow the book and get very droll, or it will clean up for brevity and then be heresy to the devout fans. And since it tells an anti-Hollywood message it won't win any awards and the reviews will hate it on ideological ground (but find other excuses to trash it). But that it was able to get made in Hollywood against the odds (the Citizen Cane, or Passion of Christ factor), that makes it significant for its rarity alone.

It is timely, polarizing and was hard to make in Hollywood: thus one of the most important movies of the year. (Anything that adds diversity of thought to Hollywood is important).

These movies fell into the category where the reviewers were incredibly biased against it. Either not reviewing them, or giving them lousy reviews. While these weren't the best action flicks, they were a fuckton better than some of the bad documentaries and shows that the reviewers would sing the praises of. So the Rotten Tomatoes respective spreads of -59% (10/69) and -57% (4/61) and -41% (0/41), exists not to remind us of how bad these movies are (they aren't THAT bad), but to remind us about how out of touch (marxist) that movie critics are.